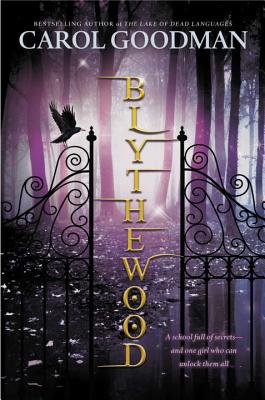 “Carol Goodman’s Blythewood is reminiscent of both Harry Potter and The Diviners, but in a way that doesn’t distract from the entertaining story within."*

After narrowly escaping death in the Triangle Shirtwaist Factory Fire, seventeen-year-old Avaline Hall is sent to Blythewood Academy, the elite girls’ boarding school in New York’s Hudson Valley that her mother attended years before. Ava hopes to solve the mystery of her mother’s death and its connection to the students who keep disappearing from Blythewood. But the school is not all that it appears . . . and neither is the handsome young man who saved Ava from the fire. What’s the meaning of the extraordinary powers Ava possesses? Who’s good and who’s evil? And who has the right to make that distinction?

Carol Goodman (www.carolgoodman.com) graduated from Vassar College, where she majored in Latin. After teaching Latin for several years, she studied for an MFA in Fiction. Her writing has been published in a number of literary magazines. She currently teaches writing and works as a writer-in-residence. She lives in the Hudson Valley.
Loading...
or
Not Currently Available for Direct Purchase