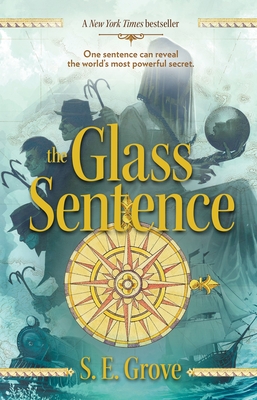 The Glass Sentence (The Mapmakers Trilogy #1)

For fans of The Golden Compass, this New York Times bestseller will take you on a fantastic journey across worlds and time.

Boston, 1891. Sophia Tims comes from a family of explorers and cartologers who, for generations, have been traveling and mapping the New World—a world changed by the Great Disruption of 1799, when all the continents were flung into different time periods. Eight years ago, Sophia's parents left her with her uncle Shadrack, the foremost cartologer in Boston, and went on an urgent mission. They never returned.

Then Shadrack is kidnapped. Sophia must search for him with the help of Theo, a refugee from the West. Together they travel over rough terrain and uncharted ocean, encounter pirates and traders, and rely on a combination of Shadrack’s maps, common sense, and Sophia's unusual powers of observation. Little do they know that their lives are in as much danger as Shadrack's.

“I am in no doubt about the energy of S.E. Grove as a full-fledged, pathfinding fantasist. I look forward to the next installment to place upon the pile. Intensely.”—Gregory Maguire, The New York Times Book Review


Praise For The Glass Sentence (The Mapmakers Trilogy #1)…

* “Brilliant in concept, breathtaking in scale and stellar in its worldbuilding; this is a world never before seen in fiction . . . Wholly original and marvelous beyond compare.”—Kirkus Reviews, starred review

* “A thrilling, time-bending debut . . . It’s a cracking adventure, and Grove bolsters the action with commentary on xenophobia and government for hire, as well as a fascinating system of map magic.”—Publishers Weekly, starred review

* “Stellar . . richly layered and emotionally engaging from the first page through to the intriguing cliffhanger end.”—BCCB, starred review

* "A mind-blowing debut . . . The bookmaking behind this first novel is as elegant as the maps within it."—Shelf Awareness, starred review

“Wonderful. This author's imagination is just amazing.”—Nancy Pearl on NPR.org

“I am in no doubt about the energy of S.E. Grove as a full-fledged, pathfinding fantasist. I look forward to the next installment to place upon the pile. Intensely.”—Gregory Maguire, The New York Times Book Review

“Not since Philip Pullman's The Golden Compass have I seen such an original and compelling world built inside a book.”—Megan Whalen Turner, New York Times bestselling author of A Conspiracy of Kings

“Absolutely marvelous.  It’s the best book I’ve read in a long time.”—Nancy Farmer, National Book Award-winning author of The House of the Scorpion

"A page-turner . . . So imaginative."—Meghan Cox Gurdon, The Wall Street Journal

S. E. Grove (segrovebooks.com) is a historian and world traveler. She spends most of her time reading about the early modern Spanish empire, writing about invented empires, and residing in Boston. Follow S. E. Grove on Twitter @segrovebooks.
Loading...
or support indie stores by buying on