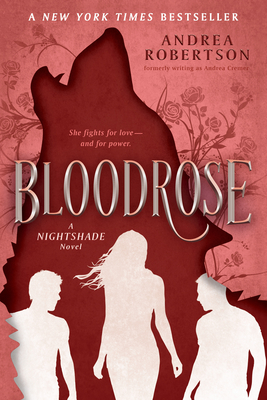 “While everything else in Calla's life has fallen apart, she has always been able to count on her friends, but now the stakes are much higher. Their journey takes them to all ends of the earth in search of the Elemental Cross, a weapon that is the only hope of destroying their enemies. Calla's survival rests squarely on the shoulders of the two men she cannot choose between, and who continue to fight over her. The final book in Cremer's epic Nightshade Trilogy will stun readers until the very last syllable.”
— Krys Tourtois, Schuler Books & Music, Lansing, MI
View the List

Calla has always welcomed war. But now that the final battle is upon her, there's more at stake than fighting. There's saving Ren, even if it incurs Shay's wrath. There's keeping her brother, Ansel, safe, even if he's been branded a traitor. There's proving herself as the pack's alpha, facing unnamable horrors, and ridding the world of the Keepers' magic once and for all. And then there's deciding what to do when the war ends. If Calla makes it out alive, that is.

Read the prequels to the Nightshade series RIFT and RISE.


Praise For Bloodrose: A Nightshade Novel…

RAVE REVIEWS FOR THE NIGHTSHADE SERIES:

“Yet another young adult novel filled with supernatural beasties, but this teen wolf tale is actually good and will keep you reading intently.”—ENTERTAINMENTWEEKLY.COM

“An imaginative . . . paranormal-suspense story. The book’s underlying themes of individualism and freedom . . . lift it to a higher level.”—KIRKUS REVIEWS

“There’s enough action to engage any reluctant reader . . .will no doubt have teens debating the relative merits of werewolves versus vampires.” —BOOKLIST

“Clever young adult saga that leaves readers on the edge of their seats.”—ASSOCIATED PRESS

“Nightshade is historical fiction—with a modern pop culture twist . . .a book for well-read hopeless romantics who like their heroines conflicted, their love interests smoldering, and their passions triangulated and torrid, yet unfulfilled.” —LOS ANGELES TIMES

Andrea Robertson is the internationally bestselling author of the Nightshade series and of Invisibility, which she co-wrote with David Levithan. She is also the author of the Inventor’s Secret trilogy and Forged in Fire and Stars. Originally from Minnesota, she now lives in California.

Visit Andrea online at ANDREAROBERTSONBOOKS.COM and on Twitter @DANDELIONINK
Loading...
or support indie stores by buying on