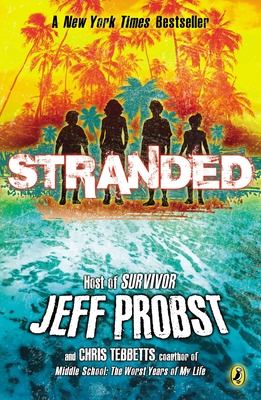 A New York Times Bestseller!
As seen on The Today Show, Rachael Ray, and Kelly and Michael.
From the Emmy-Award winning host of Survivor, Jeff Probst, with Middle School: The Worst Years of My Life co-author, Chris Tebbetts, comes a brand new family adventure series!

A family vacation becomes a game of survival!
It was supposed to be a vacation--and a chance to get to know each other better. But when a massive storm sets in without warning, four kids are shipwrecked alone on a rocky jungle island in the middle of the South Pacific. No adults. No instructions. Nobody to rely on but themselves. Can they make it home alive?

A week ago, the biggest challenge Vanessa, Buzz, Carter, and Jane had was learning to live as a new blended family. Now the four siblings must find a way to work as a team if they're going to make it off the island. They're all in this adventure together--but first they've got to learn to survive one another.

Jeff Probst is the multi-Emmy award winning host and executive producer of the popular series Survivor. A native of Wichita, Kan., Probst is married and lives in Los Angeles with his wife and 2 children when not traveling the world.  He can be followed on twitter @jeffprobst and online at www.jeffprobst.com

Chris Tebbetts is the New York Times bestselling co-author of James Patterson's Middle School series. Originally from Yellow Spring, Ohio, Tebbetts is a graduate of Northwester University. He lives and writes in Vermont.
Loading...
or support indie stores by buying on