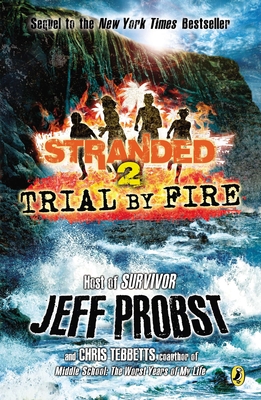 They thought it couldn't get any worse. They were wrong.

Being shipwrecked on a jungle island in the middle of the South Pacific was bad enough. But now that Carter, Vanessa, Buzz and Jane have lost their boat--and almost everything on board--to another violent storm, it's like starting over. That means finding food and shelter, making fire for the first time, dealing with the wild boars that roam the island--and of course, figuring out how to get along (and not kill each other in the process). Survival is no individual sport in a place like this, but there's only one way to learn that. The hard way.

Praise For Trial by Fire (Stranded #2)…

Jeff Probst (www.jeffprobst.com) is the multi-Emmy Award–winning host and executive producer of the popular series Survivor. A native of Wichita, Kansas, Probst is married and lives in Los Angeles with his wife and two children when not traveling the world. He can be followed on Twitter @jeffprobst and online at www.jeffprobst.com.

Chris Tebbetts is the New York Times bestselling co-author of James Patterson’s Middle School series. Originally from Yellow Spring, Ohio, Tebbetts is a graduate of Northwestern University. He lives and writes in Vermont.
Loading...
or
Not Currently Available for Direct Purchase