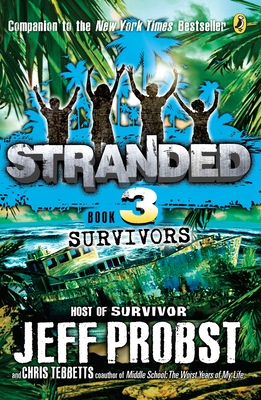 Sequel to the New York Times bestseller STRANDED and TRIAL BY FIRE! As seen on The Today Show, Rachael Ray, and Kelly and Michael.
From the Emmy-Award winning host of Survivor, Jeff Probst with Middle School: The Worst Years of My Life co-author Chris Tebbetts
comes a fantastic family adventure series!

Eleven days down, and no end in sight. How long could YOU survive?

It’s been days since Buzz, Vanessa, Carter and Jane were stranded on a deserted island in the middle of the South Pacific. Four kids left to fend for themselves. No adults. No supplies. They’ve managed to make fire and they’ve even found food. But they’ve just lost their only shelter, and quite possibly their one chance at being rescued. Now they’ll have to venture even deeper into the jungles of Nowhere Island just to stay alive. But the island holds secrets of a dark past. With danger lurking at every turn, they must rely on each other like never before it they are going to survive.

Sequel to the New York Times bestseller STRANDED and TRIAL BY FIRE!

Jeff Probst is the multi-Emmy award winning host and executive producer of the popular series Survivor. A native of Wichita, Kan., Probst is married and lives in Los Angeles with his wife and 2 children when not traveling the world.  He can be followed on twitter @jeffprobst and online at www.jeffprobst.com