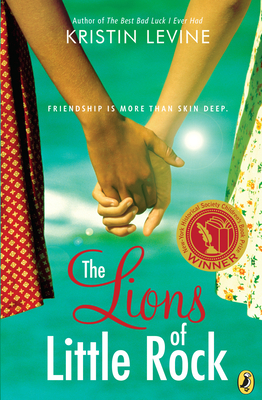 The Lions of Little Rock

As twelve-year-old Marlee starts middle school in 1958 Little Rock, it feels like her whole world is falling apart. Until she meets Liz, the new girl at school. Liz is everything Marlee wishes she could be: she's brave, brash and always knows the right thing to say. But when Liz leaves school without even a good-bye, the rumor is that Liz was caught passing for white. Marlee decides that doesn't matter. She just wants her friend back. And to stay friends, Marlee and Liz are even willing to take on segregation and the dangers their friendship could bring to both their families.

Praise For The Lions of Little Rock…

"Creating a book that reads as though written in one effortless breath requires a rare talent . . Readers will root for a painfully shy girl to discover the depths of her own courage and find hope in the notion that even in tumultuous times, standing up for the people you love can’t be wrong. Satisfying, gratifying, touching, weighty—this authentic piece of work has got soul."—The New York Times Book Review

* “The remarkable story of the Little Rock Nine is familiar to many, but what happened next? In this quietly powerful page-turner, Levine focuses her attention on the events that unfolded in Little Rock the year after the integration of the city’s public schools.”—Kirkus Reviews, starred review

* “With remarkable depth and clarity, Levine unflinchingly portrays racial tension in the 1950s Deep South. Reader will be moved by Marlee and Liz’s strong bonds and inspired by Marlee’s unwavering tenacity in the face of what seems like insurmountable adversity.”—School Library Journal, starred review

Kristin Levine (www.kristinlevine.com) received her BA in German from Swarthmore College and an MFA in film from American University. She spent a year in Vienna, Austria, working as an au pair, and has taught screenwriting at American University. Currently, she lives in Alexandria, Virginia, with her two daughters. She is the author of the critically acclaimed The Best Luck I Ever Had, The Lions of Little Rock, and The Paper Cowboy. Follow her on Twitter @KristinSLevine.
Loading...
or support indie stores by buying on