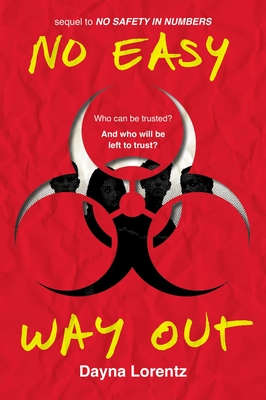 No Easy Way Out

No Safety In Numbers: Book 2

The sequel to No Safety in Numbers; a modern day Lord of the Flies for fans of apocalyptic thrillers

It's Day 7 in the quarantined mall. The riot is over and the senator trapped inside is determined to end the chaos. Even with new rules, assigned jobs, and heightened security, she still needs to get the teen population under control. So she enlists Marco's help--allowing him to keep his stolen universal card key in exchange for spying on the very football players who are protecting him.

But someone is working against the new systems, targeting the teens, and putting the entire mall in even more danger. Lexi, Marco, Ryan, and Shay believe their new alliances are sound.

They are wrong. Who can be trusted? And who will be left to trust?

The virus was just the beginning.

Praise For No Easy Way Out: No Safety In Numbers: Book 2…

AWARDS AND REVIEWS FOR NO SAFETY IN NUMBERS:

"Riveting...[Lorentz's] detailed depiction of the escalating chaos over the course of seven long days is deeply unsettling."- The New York Times

"Think of the heart-racing chase of The Hunger Games but a giant mall is your arena and everyone is potentially a tribute."- Seventeen.com

"A whopping and disturbing cliffhanger serves as the conclusion. Readers will anxiously await the sequel."- Kirkus Reviews

Dayna Lorentz has an MFA in Creative Writing and Literature from Bennington College. She used to practice law, but is now a full-time writer and part-time cupcake enthusiast. Dayna is the author of the No Safety in Numbers trilogy and lives in South Burlington, Vermont with her husband, two children, and two dogs.
Loading...
or
Not Currently Available for Direct Purchase