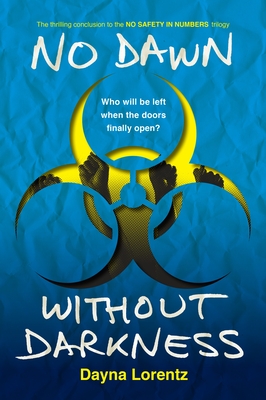 No Dawn without Darkness

No Safety In Numbers: Book 3

First--a bomb released a deadly flu virus and the entire mall was quarantined.

Next--the medical teams evacuated and the windows were boarded up just before the virus mutated.

Now--the power is out and the mall is thrown into darkness. Shay, Marco, Lexi, Ryan, and Ginger aren't the same people they were two weeks ago. Just like the virus, they've had to change in order to survive. And not all for the better. When no one can see your face, you can be anyone you want to be, and, when the doors finally open, they may not like what they've become.

If you think it's silly to be afraid of the dark, you're wrong.
Very wrong.

Praise For No Dawn without Darkness: No Safety In Numbers: Book 3…

"Realistic in its portrayal of the lasting effects of the ordeal for the survivors....The horrific actions undertaken by many of those trapped in the name of survival are disturbing but not gratuitous, and the question of morality at play in many of the characters' decisions is fascinating...a thoughtful and broad-reaching ending to a tale of surviving dire circumstances." — Kirkus Reviews

"Self-anointed king Marco remains a fantastic, complex character, and the extended denouement is rather poignant." — Booklist

"A chilling conclusion to a gripping trilogy." — School Library Journal

Dayna Lorentz has an MFA in Creative Writing and Literature from Bennington College. She used to practice law, but is now a full-time writer and part-time cupcake enthusiast. Dayna is the author of the No Safety in Numbers trilogy and lives in South Burlington, Vermont with her husband, two children, and two dogs.
Loading...
or
Not Currently Available for Direct Purchase