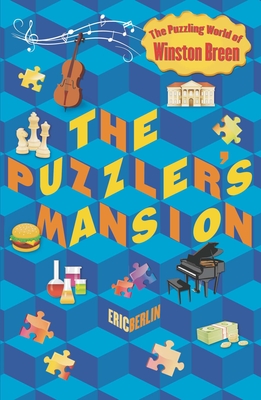 For fans of The Westing Game and The 39 Clues, a third exciting Winston Breen adventure!

Winston Breen and his friends Mal and Jake accompany Mr. Penrose for a weekend of puzzles and games at the mansion of a famous musician. Over the course of the weekend, some guests’ prizes and belongings inexplicably disappear. As the group continues with the elaborate puzzles—which the reader is invited to solve too—some of the guests try to figure out who is stealing things, and others become suspects. But in the end it’s Winston who stumbles upon several clues, and eventually discovers the real culprit. A fast-paced whodunit, this latest Winston Beren installment will have readers hooked!


Praise For The Puzzler's Mansion: The Puzzling World of Winston Breen…

* "Readers . . . will surface from this unusual mystery with their hearts pounding and their brains limbered up for more."--Booklist, starred review

Eric Berlin (www.ericberlin.com) creates puzzles for all ages, from kids (Nickelodeon Fun Puzzles & Games) to adults (his crosswords appear often in the New York Times). He is a member of the National Puzzlers' League, and enjoys creating puzzle events for schools and other groups.
Loading...
or
Not Currently Available for Direct Purchase