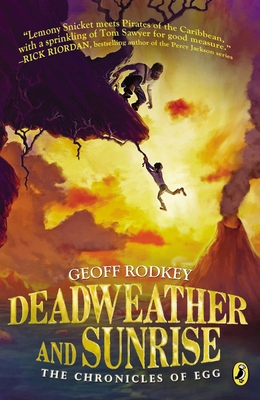 The Chronicles of Egg, Book 1

A stunning middle-grade debut--full of heart, humor, and nonstop action

It's tough to be thirteen, especially when somebody's trying to kill you.

Not that Egg's life was ever easy, growing up on sweaty, pirate-infested Deadweather Island with no company except an incompetent tutor and a pair of unusually violent siblings who hate his guts.

But when Egg's father hustles their family off on a mysterious errand to fabulously wealthy Sunrise Island, then disappears with the siblings in a freak accident, Egg finds himself a long-term guest at the mansion of the glamorous Pembroke family and their beautiful, sharp-tongued daughter Millicent. Finally, life seems perfect.

Until someone tries to throw him off a cliff.

Suddenly, Egg's running for his life in a bewildering world of cutthroat pirates, villainous businessmen, and strange Native legends. The only people who can help him sort out the mystery of why he's been marked for death are Millicent and a one-handed, possibly deranged cabin boy.

Praise For Deadweather and Sunrise: The Chronicles of Egg, Book 1…

“In this rip-roaring debut . . . Lemony Snicket meets Pirates of the Caribbean, with a sprinkling of Tom Sawyer for good measure.” —Rick Riordan, bestselling author of the Percy Jackson series

“The fast-paced swashbuckling will surely satisfy fans of adventure, but it’s really Egg’s narration that makes this pirate story rise above its counterparts . . . Colorful dialogue (including plenty of piratespeak) and a fully realized setting that will have readers wiping the sea spray from their brows round out this delightful nautical yarn.” —BCCB, starred review

“This introduction to the Chronicles of Egg series is pure fun.” —Booklist

“This promising new series starts out strong with a story filled to brim with pirates, treasure, intrigue and swashbuckling suspense . . . Egg’s first-person account is compelling, and the dialogue and vivid setting, as well as the full cast of quirky characters, make it easy to get lost in this adventure.” —Kirkus Reviews

Geoff Rodkey grew up in Freeport, Illinois, a place with no ugly fruit plantations, volcanoes, or gainfully employed pirates, although someone did briefly want to kill him when he was a teenager. He currently lives with his family on an island just off the coast of North America. He has not been to sea since an ill-fated kite fishing expedition in the Florida Keys encountered such choppy waters that his nine-year-old son threw up on his four-year-old son's head while the author was preoccupied with trying to help his seven-year-old son barf over the gunwale. This is his first book.
Loading...
or
Not Currently Available for Direct Purchase