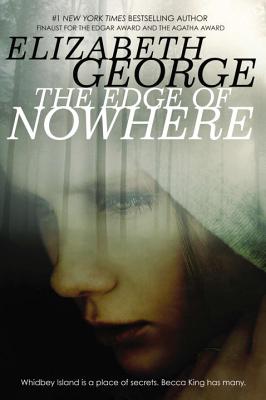 The Edge of Nowhere

“Becca King can hear whispers -- snippets of other people's thoughts that weave into her mind in occasionally dangerous ways. It's because of this ability that she finds herself stranded on remote Whidbey Island, hiding from her stepfather and involved in a mystery that shakes her new community. George brings her tremendous talents to YA for the first time, and this creepy, romantic mystery has just a hint of the paranormal and a fabulously lush Pacific-Northwest setting. Becca's story is magically addictive -- I can't wait for the next installment!”
— Hannah Manshel, 57th Street Books, Chicago, IL
View the List

On Whidbey Island, nothing is as it seems. Becca's ability to hear "whispers"—the thoughts of others—has put her at risk from her criminal stepfather. So Becca escapes to Whidbey Island, where she hopes to find safety. But when a terrible accident affects everyone on the island, Becca finds herself wrapped up in a complicated situation, and she isn't the only one with a secret.

This compelling coming-of-age story, the first of an ongoing sequence of books set on Whidbey Island, has elements of mystery, the paranormal, and romance.

"Blending mystery, family drama, teen angst and a dose of paranormal, this novel rises above many in the young adult genre." —USATODAY.com

"George has hit the nail on the proverbial head with this action-packed, mysterious, and somewhat 'creepy' novel." —Suspense Magazine


Praise For The Edge of Nowhere…

"Blending mystery, family drama, teen angst and a dose of paranormal, this novel rises above many in the young adult genre." —USATODAY.com

"George has hit the nail on the proverbial head with this action-packed, mysterious, and somewhat 'creepy' novel...the writing is superb." —Suspense Magazine

"The atmosphere of rich introspection gives this series opener strong appeal to fans of Beth Kephart and Nancy Werlin." —BCCB

"This novel explores what people can learn about each other when they look past behavior and consider the thoughts that drive it." —LMC

"George has created an interesting set of characters and plot twists that teenagers who like adventure and mysteries will enjoy." —SLJ

The first book in the Whidbey Island saga, The Edge of Nowhere, was a finalist for both the Edgar and Agatha Awards. The second book, The Edge of the Water, and the third, The Edge of the Shadows, continue the story in the island setting, which is notable for its beauty and mystery.