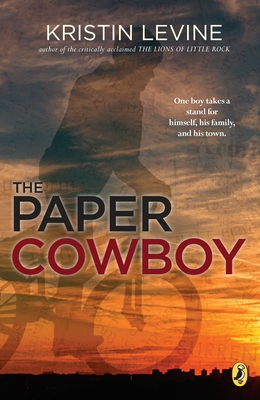 The newest powerful work of historical fiction from award-winning author of THE LIONS OF LITTLE ROCK Kristin Levine.

Though he thinks of himself as a cowboy, Tommy is really a bully.  He's always playing cruel jokes on classmates or stealing from the store. But Tommy has a reason: life at home is tough. His abusive mother isn't well; in fact, she may be mentally ill, and his sister, Mary Lou, is in the hospital badly burned from doing a chore it was really Tommy's turn to do. To make amends, Tommy takes over Mary Lou's paper route. But the paper route also becomes the perfect way for Tommy to investigate his neighbors after stumbling across a copy of The Daily Worker, a communist newspaper.

Tommy is shocked to learn that one of his neighbors could be a communist, and soon fear of a communist in this tight-knit community takes hold of everyone when Tommy uses the paper to frame a storeowner, Mr. McKenzie. As Mr. McKenzie's business slowly falls apart and Mary Lou doesn't seem to get any better, Tommy's mother's abuse gets worse causing Tommy's bullying to spiral out of control.

Praise For The Paper Cowboy…

Praise for THE PAPER COWBOY:

* “A thoughtful story about understanding and compassion, distinguished by complex characters and a supportive, tight-knit community.”—Publishers Weekly, starred review

* “A sophisticated, powerful story about a community’s ability to help one another out, and the paper cowboy who helps bring them together.”—Booklist, starred review

* “Tommy's struggle to bring his family together ends up bringing the whole community together. His journey is filled with many lessons for young readers and many historically accurate portrayals of life at that time... the lessons--acceptance of others, coming together to help others, forgiveness, and coping with mental illness--are well worth teaching.”—Examiner.com

* “Levine deftly captures a time period filled with an overarching paranoia and small-town life filled with tensions on many levels.”—School Library Journal


Praise for THE LIONS OF LITTLE ROCK:

“This classic story of how unlikely persons can change things for the better should appeal to all readers.”—VOYA, starred review


Awards and Accolades for The Lions of Little Rock

Awards and Accolades for The Best Bad Luck I Ever Had

Kristin Levine lives in Alexandria, VA with her two daughters. The Paper Cowboy is her third novel.
Loading...
or support indie stores by buying on