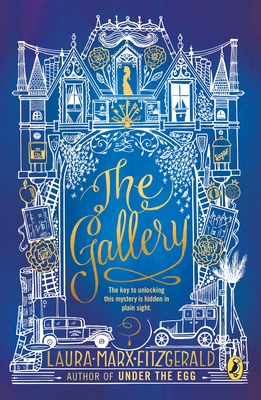 A riveting historical art mystery for fans of Chasing Vermeer and The Westing Game, set in the Roaring Twenties!

It's 1929, and twelve-year-old Martha has no choice but to work as a maid in the New York City mansion of the wealthy Sewell family. But, despite the Gatsby-like parties and trimmings of success, she suspects something might be deeply wrong in the household—specifically with Rose Sewell, the formerly vivacious lady of the house who now refuses to leave her room. The other servants say Rose is crazy, but scrappy, strong-willed Martha thinks there’s more to the story—and that the paintings in the Sewell’s gallery contain a hidden message detailing the truth. But in a house filled with secrets, nothing is quite what it seems, and no one is who they say. Can Martha follow the clues, decipher the code, and solve the mystery of what’s really going on with Rose Sewell?

Inspired by true events described in a fascinating author’s note, The Gallery is a 1920s caper told with humor and spunk that readers today will love.

Praise For The Gallery…

Praise for The Gallery

* "This lively and inventive mystery successfully incorporates history, art, and literary classics...readers will certainly be swept up by Martha’s pluck and the mystery’s many layers."—Booklist, starred review

"Offer this to fans of Blue Balliett who like sophisticated adventures."—Publishers Weekly

"Fitzgerald’s interest in art and history inform this puzzle of a novel, with Jane Eyre, Sacco and Vanzetti, the dying art of vaudeville, chemistry, and the 1929 stock market crashes all playing roles."—The Horn Book

"Young teens will enjoy [Martha's] impertinence and determination, and may not even notice that they are learning a little bit about the Sacco and Vanzetti trial and the 1928 presidential election, as well as the stock market crash of 1929." —VOYA

Praise for Under the Egg:

Under the Egg is the winner of the New Atlantic Independent Booksellers Association Best Middle Grade Book of the Year award!

"It's really a very compelling read and I don't know how she did it."—Kate DiCamillo on NPR

* "Fans of Konigsburg's From the Mixed-Up Files of Mrs. Basil E. Frankweiler and Balliett's Chasing Vermeer will thrill at the chance to solve a new mystery centered around art."—Library Media Connection, starred review

"Uniquely readable, entirely charming, and a pleasure from start to finish. Debuts this good are meant to be discovered."—School Library Journal Fuse 8 Blog