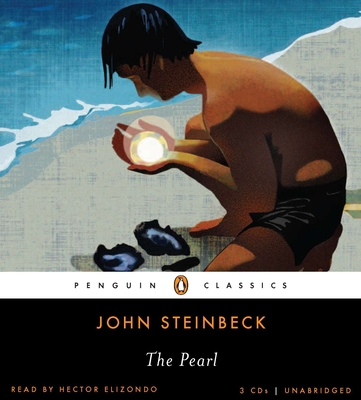 “There it lay, the great pearl, perfect as the moon.”

Like his father and grandfather before him, Kino is a poor diver, gathering pearls from the gulf beds that once brought great wealth to the Kings of Spain and now provide Kino, Juana, and their infant son with meager subsistence. Then, on a day like any other, Kino emerges from the sea with a pearl as large as a sea gull's egg, as "perfect as the moon." With the pearl comes hope, the promise of comfort and of security....

A story of classic simplicity, based on a Mexican folk tale, The Pearl explores the secrets of man's nature, the darkest depths of evil, and the luminous possibilities of love.

“[The Pearl] has the distinction and sincerity that are evident in everything he writes.”—The New Yorker

“Form is the most important thing about him. It is at its best in this work.” —Commonweal

“[Steinbeck has] long trained his prose style for such a task as this: that supple unstrained, muscular power, responsive to the slightest pull of the reins.”—Chicago Sunday Times