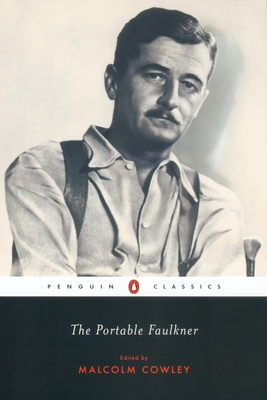 “A real contribution to the study of Faulkner’s work.” —Edmund Wilson

In prose of biblical grandeur and feverish intensity, William Faulkner reconstructed the history of the American South as a tragic legend of courage and cruelty, gallantry and greed, futile nobility and obscene crimes. He set this legend in a small, minutely realized parallel universe that he called Yoknapatawpha County, Mississippi.

No single volume better conveys the scope of Faulkner’s vision than The Portable Faulkner. The book includes self-contained episodes from the novels The Sound and the Fury, Light in August, and Sanctuary; the stories “The Bear,” “Spotted Horses,” “A Rose for Emily,” and “Old Man,” among others; a map of Yoknapatawpha County and a chronology of the Compson family created by Faulkner especially for this edition; and the complete text of Faulkner’s 1950 address upon receiving the Nobel Prize in literature. Malcolm Cowley’s critical introduction was praised as “splendid” by Faulkner himself.

Praise For The Portable Faulkner…

William Faulkner (1897–1962) was born in Mississippi and was the recipient of the Nobel Prize for Literature and the Pulitzer Prize.

Malcolm Cowley (1898–1989) a leadiing literary figure of his time, wrote numerous books of literary criticism, essays, and poetry.
Loading...
or support indie stores by buying on