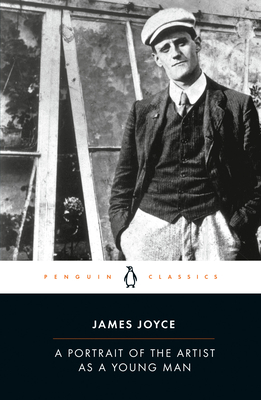 A Portrait of the Artist as a Young Man

The first, shortest, and most approachable of James Joyce’s novels, A Portrait of the Artist as a Young Man portrays the Dublin upbringing of Stephen Dedalus, from his youthful days at Clongowes Wood College to his radical questioning of all convention. In doing so, it provides an oblique self-portrait of the young Joyce himself. At its center lie questions of origin and source, authority and authorship, and the relationship of an artist to his family, culture, and race. Exuberantly inventive in style, the novel subtly and beautifully orchestrates the patterns of quotation and repetition instrumental in its hero’s quest to create his own character, his own language, life, and art: “to forge in the smithy of my soul the uncreated conscience of my race.”

This Penguin Classics edition is the definitive text, authorized by the Joyce estate and collated from all known proofs, manuscripts, and impressions to reflect the author’s original wishes.

Praise For A Portrait of the Artist as a Young Man…

“A Portrait of the Artist as a Young Man is in fact the gestation of a soul.” –Richard Ellmann

“[Mr. Joyce is] concerned at all costs to reveal the flickerings of that innermost flame which flashes its myriad message through the brain, he disregards with complete courage whatever seems to him adventitious, though it be probability or coherence or any other of the handrails to which we cling for support when we set our imaginations free.” –Virginia Woolf

“[A Portrait of the Artist as a Young Man will] remain a permanent part of English literature.” –Ezra Pound

With an Introduction by Richard Brown

James Joyce (1882–1941), an Irish poet and novelist, was one of the most celebrated writers of the twentieth century. His works include Ulysses, Finnegans Wake, and A Portrait of the Artist as a Young Man.

Seamus Deane, novelist and professor of modern English and American literature at University College, Dublin, has been a Fulbright Scholar, Woodrow Wilson Fellow, and a visiting professor at several American universities.
Loading...
or support indie stores by buying on