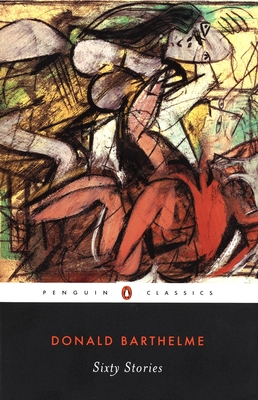 With these audacious and murderously witty stories, Donald Barthelme threw the preoccupations of our time into the literary equivalent of a Cuisinart and served up a gorgeous salad of American culture, high and low. Here are the urban upheavals reimagined as frontier myth; travelogues through countries that might have been created by Kafka; cryptic dialogues that bore down to the bedrock of our longings, dreams, and angsts. Like all of Barthelme's work, the sixty stories collected in this volume are triumphs of language and perception, at once unsettling and irresistible.

"Barthelme can focus our feeling into a bright point that can raise a blister. These 60 stories show him inventing at a fever pitch." —The Washington Post

"Donald Barthelme may have influenced the short story in his time as much as Hemingway and O' Hara did in theirs." —The New York Times

"The delight he offers to readers is beyond question, his originality is unmatched." —Los Angeles Times

Donald Barthelme (1931-1989) published twelve books, including two novels and a prize-winning children's book. He was a regular contributor to the New Yorker and taught creative writing at the University of Houston. In his career, he won a Guggenheim Fellowship, a National Book Award, and a National Institute of Arts and Letters Award, among others.

David Gates is a book critic at Newsweek. He is the author of three acclaimed works of fiction.