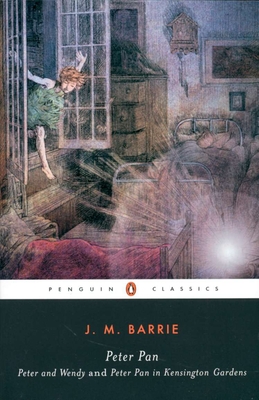 Peter and Wendy and Peter Pan in Kensington Gardens

J.M. Barrie's classic tale of the "boy who would not grow up"

Peter Pan originally appeared as a baby living a magical life among birds and fairies in J.M. Barrie’s sequence of stories, Peter Pan in Kensington Gardens. His later role as flying boy hero was brought to the stage by Barrie in the beloved play Peter Pan, which opened in 1904 and became the novelPeter and Wendy in 1911. In a narrative filled with vivid characters, epic battles, pirates, fairies, and fantastic imagination, Peter Pan’s adventures capture the spirit of childhood—and of rebellion against the role of adulthood in conventional society.

This edition includes the novel and the stories, as well as an introduction by eminent scholar Jack Zipes. Looking at the man behind Peter Pan and sifting through the psychological interpretations that have engaged many a critic, Zipes explores the larger cultural and literary contexts in which we should appreciate Barrie’s enduring creation and shows why Peter Pan is a work not for children but for adults seeking to reconnect with their own imagination.

Praise For Peter Pan: Peter and Wendy and Peter Pan in Kensington Gardens…

“Barrie wrote his fantasy of childhood, added another figure to our enduring literature, and thereby undoubtedly made one of the boldest bids for immortality of any writer. . . . It is a masterpiece.”
–J. B. PRIESTLEY

James Matthew Barrie lived from 1860 to 1937. He was born in Scotland, the son of a weaver. He adored his mother, Margaret Ogilvie - it was the Scottish fashion in those days for wives to keep their maiden names - and, although the family were quite poor she made sure that he was educated. James moved to London in 1885 to follow a literary career. He first wrote short stories and later successful plays which made him rich and famous. He was very nervous when he gave Peter Pan to his theatrical manager because it was a child's fantasy, the first and only time he had ever written especially for children. But Peter Pan with its flying and theatrical devices was a huge success and continues to be performed today. In 1911 James Barrie turned his play into a novel, one of the most thrilling and magical of all the great adventures that have been written for children.

Jack Zipes (foreword) is a preeminent fairy tale scholar who has written, translated, or edited dozens of books, including The Original Folk and Fairy Tales of the Brothers Grimm. He is a professor emeritus of German and comparative literature at the University of Minnesota.
Loading...
or support indie stores by buying on