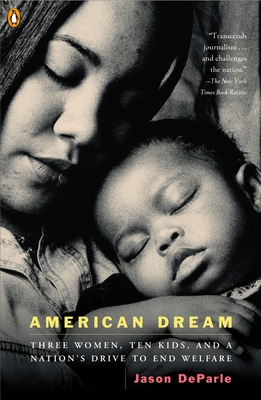 In this definitive work, two-time Pulitzer finalist Jason DeParle, author of A Good Provider Is One Who Leaves, cuts between the mean streets of Milwaukee and the corridors of Washington to produce a masterpiece of literary journalism. At the heart of the story are three cousins whose different lives follow similar trajectories. Leaving welfare, Angie puts her heart in her work. Jewell bets on an imprisoned man. Opal guards a tragic secret that threatens her kids and her life. DeParle traces  their family history back six generations to slavery and weaves poor people, politicians, reformers, and rogues into a spellbinding epic.

With a vivid sense of humanity, DeParle demonstrates that although we live in a country where anyone can make it, generation after generation some families don’t. To read American Dream is to understand why.

Jason DeParle, a reporter for The New York Times, has also written for The New Republic, the Washington Monthly, and The New Orleans Times-Picayune. A former Henry Luce Scholar, DeParle was a finalist for the Pulitzer Prize in 1995 and 1998 for his reporting on the welfare system.
Loading...
or
Not Currently Available for Direct Purchase