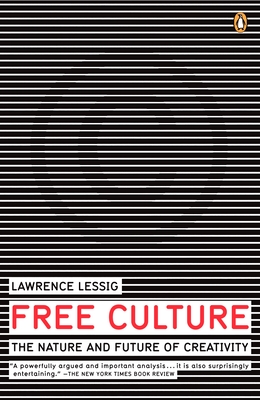 The Nature and Future of Creativity

Lawrence Lessig, “the most important thinker on intellectual property in the Internet era” (The New Yorker), masterfully argues that never before in human history has the power to control creative progress been so concentrated in the hands of the powerful few, the so-called Big Media. Never before have the cultural powers- that-be been able to exert such control over what we can and can’t do with the culture around us. Our society defends free markets and free speech; why then does it permit such top-down control? To lose our long tradition of free culture, Lawrence Lessig shows us, is to lose our freedom to create, our freedom to build, and, ultimately, our freedom to imagine.

Praise For Free Culture: The Nature and Future of Creativity…

"An entertaining and important look at the past and future of the cold war between the media industry and new technologies." —Marc Andreessen, cofounder of Netscape

Lawrence Lessig is a professor at Stanford Law School and the founder of the Stanford Center for Internet and Society. The author of The Future of Ideas and Code and Other Laws of Cyberspace, he is the chair of the Creative Commons project. A graduate of the University of Pennsylvania, Cambridge University, and Yale Law School, he has clerked for Judge Richard Posner of the U.S. 7th Circuit Court of Appeals and Judge Antonin Scalia of the U.S. Supreme Court.
Loading...
or
Not Currently Available for Direct Purchase