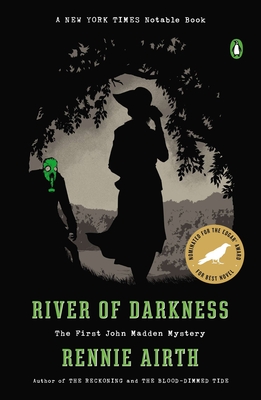 "It's the tactics and the terrain, the morale and the characters that make the difference between an average thriller and one as good as this."—The New York Times Book Review

Upon its original publication, River of Darkness awed readers who look for intelligent, well-plotted psychological mysteries. This “fine, frightening piece of work” (Kirkus Reviews) introduces inspector John Madden who, in the years following World War I, is sent to a small village to investigate a particularly gruesome attack. The local police dismiss the slaughter as a botched robbery, but Madden detects the signs of a madman at work. With the help of Dr. Helen Blackwell, who introduces him to the latest developments in criminal psychology, Madden sets out to identify and capture the killer, even as the murderer sets his sights on his next innocent victims.

“Move over, Inspectors Alleyn, Dalgliesh, and Morse, and make room for John Madden in the pantheon of great, civilized English sleuths.”—The New Yorker

"One of the best mysteries I have read in years."—The Boston Globe

"All the familiar elements of suspense writing are given an unusual and satisfying twist in this grim and fascinating thriller—the initial volume of a promised series...A fine, frightening piece of work."—Kirkus Reviews (starred)

"I have been a huge fan of Rennie Airth's novels featuring John Madden since first reading River of Darkness... Airth is at the top of his game, engaging the reader with dense plotting, page-turning narrative and expert characterization."—Jacqueline Winspear, author of Maisie Dobbs

“Madden is seamlessly admirable…In an era when our real-life heroes tend to have feet of thick, grubby clay, it can be bracing to spend time with a  man who is naturally but not implausibly noble.”—The Washington Post Book World

"Readers who are looking for smart, well-plotted psychological mysteries will be delighted."—Booklist

Rennie Airth was born in South Africa and worked as a foreign correspondent for Reuters before becoming a novelist. He is the author of two other John Madden mysteries, River of Darkness, a finalist for the Edgar Award for Best Novel and a Macavity Award for Best Mystery, and a New York Times Notable Book, and The Blood-Dimmed Tide. He lives in Cortona, Italy.
Loading...
or support indie stores by buying on