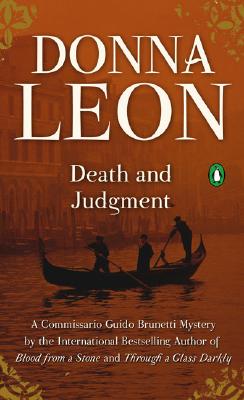 With more than 500,000 copies of her books in print in the United States, Donna Leon continues to find new fans for her riveting Commissario Guido Brunetti mysteries. In Death and Judgment, a truck crashes and spills its dangerous cargo on a treacherous road in the Italian Dolomite mountains. Meanwhile, in Santa Lucia, a prominent international lawyer is found dead aboard an intercity train. Suspecting a connection between the two tragedies, Brunetti digs deep for an answer, stumbling upon a seedy Venetian bar that holds the key to a crime network that reaches far beyond the laguna. But it will take another violent death in Venice before Brunetti and his colleagues begin to understand what is really going on.


Praise For Death and Judgment…

The sophisticated but still moral Brunetti ... proves a worthy custodian of timeless values and verities. (The Wall Street Journal)

No one is more graceful and accomplished than Leon. (The Washington Post)

A New Yorker of Irish/Spanish descent, Donna Leon first went to Italy in 1965, returning regularly over the next decade or so while pursuing a career as an academic in the States and then later in Iran, China and finally Saudi Arabia. It was after a period in Saudi Arabia, which she found 'damaging physically and spiritually' that Donna decided to move to Venice, where she has now lived for over twenty years.Her debut as a crime fiction writer began as a joke: talking in a dressing room in Venice's opera-house La Fenice after a performance, Donna and a singer friend were vilifying a particular German conductor. From the thought 'why don't we kill him?' and discussion of when, where and how, the idea for Death at La Fenice took shape, and was completed over the next four months. Donna Leon is the crime reviewer for the London Sunday Times and is an opera expert. She has written the libretto for a comic opera, entitled Dona Gallina. Set in a chicken coop, and making use of existing baroque music, Donna Gallina was premiered in Innsbruck. Brigitte Fassbaender, one of the great mezzo-sopranos of our time, and now head of the Landestheater in Innsbruck, agreed to come out of retirement both to direct the opera and to play the part of the witch Azuneris (whose name combines the names of the two great Verdi villainesses Azucena and Amneris).
Loading...
or
Not Currently Available for Direct Purchase