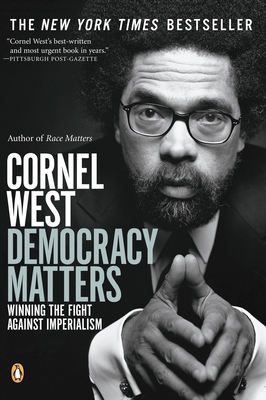 Winning the Fight Against Imperialism

“Uncompromising and unconventional . . . Cornel West is an eloquent prophet with attitude.” —Newsweek“

West reveals himself as a thinker of dazzling erudition, whose critiques are inevitably balanced by an infectious optimism and magnanimity of spirit.” —The Village Voice

In his major bestseller, Race Matters, philosopher Cornel West burst onto the national scene with his searing analysis of the scars of racism in American democracy. Race Matters has become a contemporary classic, still in print after ten years, having sold more than four hundred thousand copies. A mesmerizing speaker with a host of fervidly devoted fans, West gives as many as one hundred public lectures a year and appears regularly on radio and television. Praised by The New York Times for his "ferocious moral vision" and hailed by Newsweek as "an elegant prophet with attitude," he bridges the gap between black and white opinion about the country's problems.

In Democracy Matters, West returns to the analysis of the arrested development of democracy-both in America and in the crisis-ridden Middle East. In a strikingly original diagnosis, he argues that if America is to become a better steward of democratization around the world, we must first wake up to the long history of imperialist corruption that has plagued our own democracy. Both our failure to foster peace in the Israeli-Palestinian conflict and the crisis of Islamist anti-Americanism stem largely from hypocrisies in our dealings with the world. Racism and imperial expansionism have gone hand in hand in our country's inexorable drive toward hegemony, and our current militarism is only the latest expression of that drive. Even as we are shocked by Islamic fundamentalism, our own brand of fundamentalism, which West dubs Constantinian Christianity, has joined forces with imperialist corporate and political elites in an unholy alliance, and four decades after the murder of Dr. Martin Luther King, Jr., insidious racism still inflicts debilitating psychic pain on so many of our citizens.

But there is a deep democratic tradition in America of impassioned commitment to the fight against imperialist corruptions-the last great expression of which was the civil rights movement led by Dr. King-and West brings forth the powerful voices of that great democratizing tradition in a brilliant and deeply moving call for the revival of our better democratic nature. His impassioned and provocative argument for the revitalization of America's democracy will reshape the terms of the raging national debate about America's role in today's troubled world.


Praise For Democracy Matters: Winning the Fight Against Imperialism…

“Uncompromising and unconventional . . . Cornel West is an eloquent prophet with attitude.” —Newsweek

“West reveals himself as a thinker of dazzling erudition, whose critiques are inevitably balanced by an infectious optimism and magnanimity of spirit.” —The Village Voice

Cornel West has been Professor of Religion and Director of African American Studies at Princeton University since 1988. Recently he was appointed Professor of African American Studies and the Philosophy of Religion at Harvard University. He is the author of many books, including Keeping Faith, Prophetic Fragments, and, with bell hooks, Breaking Bread.
Loading...
or
Not Currently Available for Direct Purchase