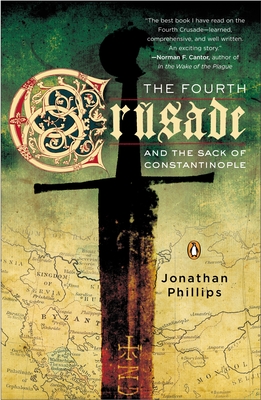 The Fourth Crusade and the Sack of Constantinople (Paperback)

In 1202, zealous Western Christians gathered in Venice determined to liberate Jerusalem from the grip of Islam. But the crusaders never made it to the Holy Land. Steered forward by the shrewd Venetian doge, they descended instead on Constantinople, wreaking terrible devastation. The crusaders spared no one: They raped and massacred thousands, plundered churches, and torched the lavish city. By 1204, one of the great civilizations of history had been shattered. Here, on the eight hundredth anniversary of the sack, is the extraordinary story of this epic catastrophe, told for the first time outside of academia by Jonathan Phillips, a leading expert on the crusades. Knights and commoners, monastic chroniclers, courtly troubadours, survivors of the carnage, and even Pope Innocent III left vivid accounts detailing the events of those two fateful years. Using their remarkable letters, chronicles, and speeches, Phillips traces the way in which any region steeped in religious fanaticism, in this case Christian Europe, might succumb to holy war.

Jonathan Phillips, a senior lecturer in medieval history at Royal Holloway, University of London, is the author of a number of books on the crusades, including Defenders of the Holy Land and The Crusades: 1095–1197. Phillips’s articles have appeared in BBC History, History Today, and the Independent.  Phillips is a frequent guest on Radio 4 and BBC World Service, as well as England’s Channel 4, the BBC, The History Channel, and PBS.
or support indie stores by buying on
Copyright © 2020 American Booksellers Association