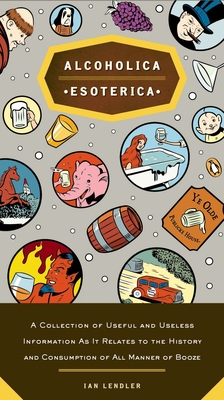 Finally, there’s a book that’s almost as much fun as having a couple of drinks. Alcoholica Esoterica presents the history and culture of booze as told by a writer with a knack for distilling all the boring bits into the most interesting facts and hilarious tales. It’s almost like pulling up a stool next to the smartest and funniest guy in the bar. Divided into chapters covering the basic booze groups—including beer, wine, Champagne, whiskey, rum, gin, vodka, and tequila—Alcoholica Esoterica charts the origin and rise of each alcohol’s particular charms and influence. Other sections chronicle “Great Moments in Hic-story,” “Great Country Drinking Songs,” “10 Odd Laws,” and “Mt. Lushmore, Parts I–V.” Additionally, famous quotes on the joys and sorrows of liquor offer useful shots of advice and intoxicating whimsy.

Ian Lendler is the author of An Undone Fairy Tale and coauthor of Chelsea Clinton’s Freshman Notebook. The former humor editor for IndiePlanet.com, in 2000 he co-founded the humor Web site Freedonian.com, which was featured in Time Out New York, Gear Magazine, and on CNN.com.
Loading...
or
Not Currently Available for Direct Purchase