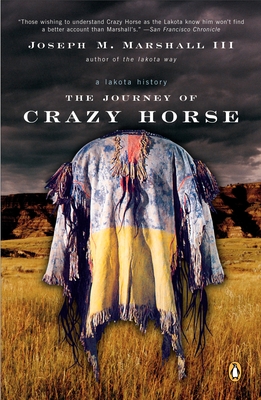 The Journey of Crazy Horse

Most of the world remembers Crazy Horse as a peerless warrior who brought the U.S. Army to its knees at the Battle of Little Bighorn. But to his fellow Lakota Indians, he was a dutiful son and humble fighting man who—with valor, spirit, respect, and unparalleled leadership—fought for his people’s land, livelihood, and honor. In this fascinating biography, Joseph M. Marshall, himself a Lakota Indian, creates a vibrant portrait of the man, his times, and his legacy.

Thanks to firsthand research and his culture’s rich oral tradition (rarely shared outside the Native American community), Marshall reveals many aspects of Crazy Horse’s life, including details of the powerful vision that convinced him of his duty to help preserve the Lakota homeland—a vision that changed the course of Crazy Horse’s life and spurred him confidently into battle time and time again.

The Journey of Crazy Horse is the true story of how one man’s fight for his people’s survival roused his true genius as a strategist, commander, and trusted leader. And it is an unforgettable portrayal of a revered human being and a profound celebration of a culture, a community, and an enduring way of life.

"Those wishing to understand Crazy Horse as the Lakota know him won't find a better accout than Marshall's." -San Francisco Chronicle

Praise For The Journey of Crazy Horse: A Lakota History…

"Those wishing to understand Crazy Horse as the Lakota know him won't find a better accout than Marshall's." -San Francisco Chronicle

Joseph M. Marshall III, historian, educator, and storyteller, is the author of many books, including The Journey of Crazy Horse and The Lakota Way: Stories and Lessons for the Living, which was a finalist for the PEN Center USA West Award in 2002. He was raised on the Rosebud Sioux Indian Reservation and his first language is Lakota. Marshall is a recipient of the Wyoming Humanities Award, and he has been a technical advistor and actor in television movies, including Return to Lonesome Dove. He makes his home on the Northern Plains.
Loading...
or support indie stores by buying on