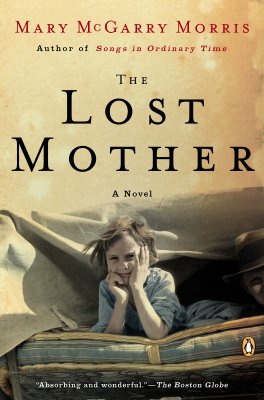 Since the publication of her astonishing debut, Vanished, Mary McGarry Morris has been compared with John Steinbeck and Carson McCullers and widely praised as "a superb storyteller" (The Washington Post) and "one of our finest American writers" (The Miami Herald). Now, in her sixth novel, Morris has achieved new heights with her riveting chronicle of the Talcotts, a family in rural Vermont during the Great Depression.

Abandoned by his beautiful wife, Irene, Henry and their two young children, Thomas and Margaret, spend that summer in a tent on the edge of Black Pond. Henry, an itinerant butcher, struggles to provide for them, but often must leave them alone as he travels the county in search of work. And while Henry loves his children deeply, he is devastated by their mother's desertion. He has not told them why she left or if she'll return. When Mrs. Phyllis Farley, a prosperous neighbor, begins to woo the children as companions for her strange, housebound son, Henry must weigh an unusual proposition, the consequences of which may cost him everything. Powerfully imagined and intensely felt, The Lost Mother is a haunting masterwork and McGarry Morris's strongest novel to date.

Mary McGarry Morris is the author of Vanished, which was a finalist for the National Book Award and the PEN/Faulkner Award; A Dangerous Woman, which was chosen by Time as of of the five best novels of 1991; Songs in Ordinary Time, an Oprah's Book Club Selection and national bestseller, and the critically acclaimed Fiona Range and A Hole in the Universe. She lives in Andover, Massachussetts.On the web: http: //www.marymcgarrymorris.com

Irene Jalley seemed to start out with a lot of ambitious plans for her future—for instance to get her business college correspondence certificate and get a job—but “she had fallen in love with Henry” (p. 5). Why do you think she decided to give up all her plans and get married? Do you think this was the right choice for her? Are women still faced with these same kinds of choices (and consequences) today?

What do you think Irene’s real reasons are for walking out on her children? “I knew if I stayed something terrible would happen,” Irene says to Thomas. What does she think will happen? What is Irene so afraid of?

When Thomas and Margaret arrive at the Farley house, Thomas says he felt “as if he were being pressed back by a great force that would consume his sister just as it had his mother” (p. 75). What do you think Thomas means by this? What “force” is he talking about?

On page 31, Margaret says, “When I have little kids I’ll never leave them alone.” At that young age, she’s already bound and determined not to repeat her mother’s mistakes, and she seems to succeed by the end of the novel. In life, however, many people do in fact continue destructive patterns within a family. Why do you think Margaret is able to overcome her past? Does this prove that family history doesn’t necessarily have to repeat itself? And if it does, how do we keep ourselves from making the same mistakes as our parents?

Gladys is one of the most benevolent characters in the book. Despite being “betrayed” by Henry she seems to hold no grudges against him or his children and never speaks ill of Irene, even when given a chance. Why do you think Gladys is able to be so forgiving? At the end of the novel, Margaret refers to Gladys as “a good mother.” Consider what that means and the significance of her role in the novel.

We are told by Mrs. Farley (p. 20) that her husband offered Henry the chance to stay on the land as a tenant, but that Henry had “chosen pride over family.” Was this the right choice? Is it ever worthwhile to sacrifice one’s pride and principles? What choices does Henry make that you agree/disagree with? Could Henry have done anything differently so that things might not have turned out as dire for his family?

On page 188, McGarry Morris writes about “that moment of revelation when all is understood though nothing is known.” What does Thomas understand at that moment?

Irene has been successful at hiding Margaret and Thomas from Mr. Dexter until the day Mr. Dexter inadvertently discovers them at the house. At that point (p. 213), Irene suddenly proclaims to Mr. Dexter, “They’re my children. They’re mine.” This is the one and only time she acknowledges her children as her own. Why do you think she claims them at that particular moment?

In a way, the novel is about unmet expectations—Gladys wants Henry, Henry wants his wife back and a job, Margaret and Thomas want their mother and father together and a happy home life, the Farleys want “normal” children; and Irene wants a more prosperous and orderly life. What does our seemingly unending desire for what we don’t have say about human nature? Do you believe we are destined always to wish for things we don’t have?

Not only do Thomas and Margaret have to endure their mother’s absence, but society in general treats them quite harshly. Do you think we’re more sensitive now, in the twenty-first century, to the needs and feelings of children? How has the way we parent today changed at all since time of the Depression? Do you think we are more (or less) enlightened?