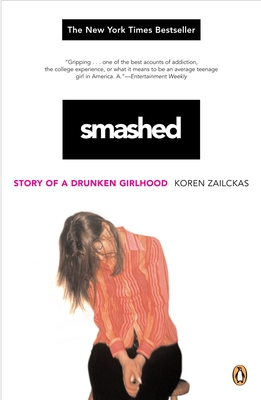 Story of a Drunken Girlhood

Garnering a vast amount of attention from young people and parents, and from book buyers across the country, Smashed became a media sensation and a New York Times bestseller. Eye-opening and utterly gripping, Koren Zailckas’s story is that of thousands of girls like her who are not alcoholics—yet—but who routinely use booze as a shortcut to courage and a stand-in for good judgment.

With one stiff sip of Southern Comfort at the age of fourteen, Zailckas is initiated into the world of drinking. From then on, she will drink faithfully, fanatically. In high school, her experimentation will lead to a stomach pumping. In college, her excess will give way to a pattern of self-poisoning that will grow more destructive each year. At age twenty-two, Zailckas will wake up in an unfamiliar apartment in New York City, elbow her friend who is passed out next to her, and ask, "Where are we?" Smashed is a sober look at how she got there and, after years of blackouts and smashups, what it took for her to realize she had to stop drinking. Smashed is an astonishing literary debut destined to become a classic.


Praise For Smashed: Story of a Drunken Girlhood…

"Bookstores are flooded with boozy bios by former girls gone wild." This one rises to the top. -People

"Brilliant and horrifying." -The Baltimore Sun

Koren Zailckas is the author of the memoir Smashed: Story of a Drunken Girlhood, which appeared on ten national bestseller lists and spent twenty weeks on the The New York Times bestseller list. She lives in Brooklyn, New York with her husband and daughter.
Loading...
or
Not Currently Available for Direct Purchase