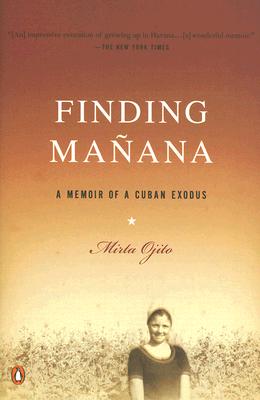 A Memoir of a Cuban Exodus

Finding Mañana is a vibrant, moving memoir of one family's life in Cuba and their wrenching departure. Mirta Ojito was born in Havana and raised there until the unprecedented events of the Mariel boatlift brought her to Miami, one teenager among more than a hundred thousand fellow refugees. Now a reporter for The New York Times, Ojito goes back to reckon with her past and to find the people who set this exodus in motion and brought her to her new home. She tells their stories and hers in superb and poignant detail-chronicling both individual lives and a major historical event.

Growing up, Ojito was eager to excel and fit in, but her parents'—and eventually her own—incomplete devotion to the revolution held her back. As a schoolgirl, she yearned to join Castro's Young Pioneers, but as a teenager in the 1970s, when she understood the darker side of the Cuban revolution and learned more about life in el norte from relatives living abroad, she began to wonder if she and her parents would be safer and happier elsewhere. By the time Castro announced that he was opening Cuba's borders for those who wanted to leave, she was ready to go; her parents were more than ready: They had been waiting for this opportunity since they married, twenty years before.

Finding Mañana gives us Ojito's own story, with all of the determination and intelligence—and the will to confront darkness—that carried her through the boatlift and made her a prizewinning journalist. Putting her reporting skills to work on the events closest to her heart, she finds the boatlift's key players twenty-five years later, from the exiles who negotiated with Castro to the Vietnam vet on whose boat, Mañana, she finally crossed the treacherous Florida Strait. Finding Mañana is the engrossing and enduring story of a family caught in the midst of the tumultuous politics of the twentieth century.


Praise For Finding Manana: A Memoir of a Cuban Exodus…

“It’s impossible not to admire the boldness, the candor, the moral toughness of Ms. Ojito’s writing. In this wonderful memoir, she ransoms herself from the seductions of nostalgia, and reclaims instead the beleaguered Cuba of her childhood—a Cuba that is all the more interesting for not being looked at through the prism of longing and desire.”—The New York Times

“In Finding Mañana, Mirta Ojito goes a long way in righting the Mariel story and bestowing some belated dignity on this ragged stepchild of exile history.”—The Los Angeles Times

"Ms. Ojito's book is filled with the anguish of separation and the tragedy of living under a merciless regime. But it also celebrates familial bonds and undying love—not to mention freedom itself, a gift too often taken for granted by those of us who have never had to live without it.”—The Wall Street Journal

“The insight Ojito brings to bear, coupled with the crispness if her prose…make this memoir required reading for anyone interested in the history of post-Batista Cuba or Cuban-American relations.”—The Washington Post

“New York Times reporter Mirta Ojito melds the personal with the political in a moving account of her family's departure from Cuba. She also provides a solid historical context for those five months in 1980 when 125,000 Cubans arrived in Florida, a mass exodus that came to be known as the Mariel boat lift.”—People

“Ojito’s historical reconstruction is fascinating... (She) has created a poignant and poetic memoir of an important moment in Cuban and US history.”—The Washington Times

“…this is much more than one Cuban exile’s bittersweet tale; it’s the memoir of an entire era.” —Times-Picayune

“Ojito's book…is unlike most entries in the genre of the modern memoir. More than a novelistic exercise in creative recollection, it’s a skillful blend of reportage and family history about a pivotal international event.”—Sun-Sentinel

“Like many Cuban exiles, Ojito says she left part of her soul in Cuba. The good news is the rest of it came over with her intact. Plenty of it went into this book.”—St. Petersburg Times

“… a political drama … bound to be a page-turner.”—Palm Beach Post

“A thorough and exciting account…a suspenseful story…A skillful melding of individual personalities with the grand currents of history.”—Kirkus Reviews

“...fast-paced and riveting…Ojito uses her formidable research, eye for detail and interviewing skills to lay bare the behind-the-scenes machinations…through her writing, she has opened a window for others, and offers a fine introduction to the human face of history.”—Bookpage

“…a rich, but nuanced picture of life in Cuba under Castro and the intimately personal nature of politics.”—Library Journal

“Until I read this book, the Mariel refugees were headlines in a newspaper, stereotypes fed by political rhetoric. In Finding Mañana, Mirta Ojito has given me a peek behind the headlines, and a sense of how history affects the individual." —Esmeralda Santiago, author of When I was Puerto Rican

“Finding Mañana is a strongly written, straight-shooting and affecting memoir about one family’s experiences leading up to the Mariel boatlift out of Cuba.  Rich in detail and concise in its capturing of that chapter of Cuban history, the book is also a touching tale of a young woman’s coming of age during a time of great political turmoil and personal travails.”—Oscar Hijuelos, author of The Mambo Kings Play Songs of Love

Mirta Ojito was born in Havana, Cuba, and came to the United States in 1980 in the Mariel boatlift. She has received the American Society of Newspaper Editors' Award for best foreign reporting, and she shared the 2000 Pulitzer Prize for national reporting, for her contribution to the series "How Race Is Lived in America." Her work has appeared in several anthologies, including Written into History: Pulitzer Prize Reporting of the Twentieth Century from The New York Times, edited by Anthony Lewis. Ojito has taught journalism at New York University, Columbia University, and the University of Miami. She writes for The New York Times from Miami.
Loading...
or
Not Currently Available for Direct Purchase