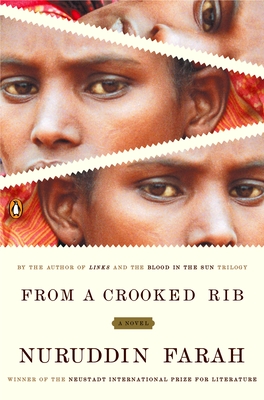 From a Crooked Rib (Paperback)

Written with complete conviction from a woman's point of view, Nuruddin Farah's spare, shocking first novel savagely attacks the traditional values of his people yet is also a haunting celebration of the unbroken human spirit. Ebla, an orphan of eighteen, runs away from her nomadic encampment in rural Somalia when she discovers that her grandfather has promised her in marriage to an older man. But even after her escape to Mogadishu, she finds herself as powerless and dependent on men as she was out in the bush. As she is propelled through servitude, marriage, poverty, and violence, Ebla has to fight to retain her identity in a world where women are "sold like cattle."

Nurudin Farah is the author of nine novels, including From a Crooked Rib, Links and his Blood in the Sun trilogy: Maps, Gifts, and Secrets. His novels have been translated into seventeen languages and have won numerous awards. Farah was named the 1998 laureate of the Neustadt International Prize for Literature, "widely regarded as the most prestigious international literary award after the Nobel" (The New York Times). Born in Baidoa, Somalia, he now lives in Cape Town, South Africa, with his wife and their children.