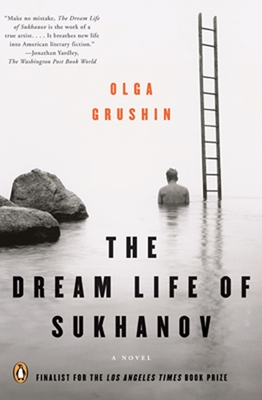 The Dream Life of Sukhanov

Olga Grushin’s astonishing literary debut has won her comparisons with everyone from Gogol to Nabokov. A virtuoso study in betrayal and its consequences, it explores—really, colonizes—the consciousness of Anatoly Sukhanov, who many years before abandoned the precarious existence of an underground artist for the perks of a Soviet apparatchik. But, at the age of 56, his perfect life is suddenly disintegrating. Buried dreams return to haunt him. New political alignments threaten to undo him. Vaulting effortlessly from the real to the surreal and from privilege to paranoia, The Dream Life of Sukhanov is a darkly funny, demonically entertaining novel.

Praise For The Dream Life of Sukhanov…

The Dream Life of Sukhanov will tower over the majority of what publishers put out this year. (New York)

Steeped in the tradition of Gogol, Bulgakov, and Nabokov, Grushin is clearly a writer of large and original talent. (James Lasdun)

The next big thing in American literary fiction . . . so accomplished are her skills—so hauntingly assured—that more than one US critic has greeted her as the next great American novelist. (Financial Times)

Olga Grushin was born in Moscow in 1971. She studied at the Pushkin Museum of Fine Arts, Moscow State University, and Emory University. Her short fiction has appeared in Partisan Review, Confrontation, The Massachusetts Review, and Art Times. This is her first novel. Grushin, who became an American citizen in 2002, lives in Washington, D.C.
Loading...
or
Not Currently Available for Direct Purchase