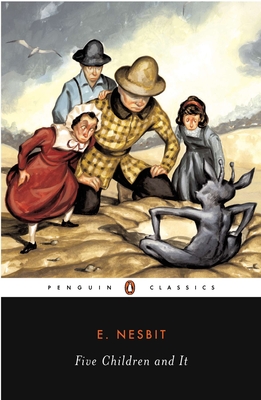 Five Children and It

While exploring the environs of their summer home, five brothers and sisters find a Psammead, or Sand-fairy, in a nearby gravel pit: “Its eyes were on long horns like a snail’s eyes, and it could move them in and out like telescopes; it had ears like a bat’s ears, and its tubby body was shaped like a spider’s and covered with thick soft fur; its legs and arms were furry too, and it had hands and feet like a monkey’s.” The Psammead is magical and, every day, the ancient and irritable creature grants each of them a wish that lasts until sunset. Soon, though, they find their wishes never seem to turn out right and often have unexpected—and humorous—consequences. But when an accidental wish goes terribly wrong, the children learn that magic, like life, can be as complicated as it is exciting. This edition contains an enchanting introduction by children's literature scholar Gillian Avery about the complex and unconventional Nesbit, and includes all of the original illustrations, suggestions for further reading, and explanatory notes


Praise For Five Children and It…

Edith Nesbit (1858 – 1924), was a mischievous, tomboyish child who grew up to be an unconventional adult. She and her husband were founding members of the socialist Fabian Society and their home became a center for socialist and literary discussion. Their friends included some of the greatest writers and thinkers of the time, including George Bernard Shaw and H. G. Wells. Edith broke the mould demanded of women by English society at the time – she expressed her individuality through her self-presentation and her habit of speaking forcefully on almost any subject.

E. Nesbit – she always used the plain initial for her writing and was sometimes thought to be a man – started to write for children after years of successful writing for adult magazines. She was asked to write about her childhood but instead of facts chose to describe her happy girlhood in fiction. Thus were written the books that are still read today, and which have been firm bestsellers for decades. She was brilliant at combining real-life situations with elements of fantasy and humour. Films –such as The Railway Children - have kept her stories in the public eye, and her magical fantasies, including Five Children and It, continue to delight each new generation of children.