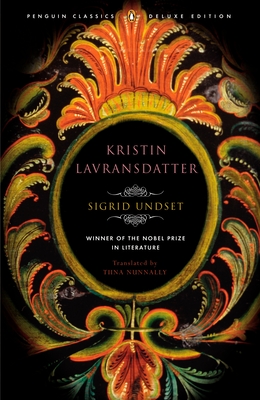 In her great historical epic Kristin Lavransdatter, set in fourteenth-century Norway, Nobel laureate Sigrid Undset tells the life story of one passionate and headstrong woman. Painting a richly detailed backdrop, Undset immerses readers in the day-to-day life, social conventions, and political and religious undercurrents of the period. Now in one volume, Tiina Nunnally’s award-winning definitive translation brings this remarkable work to life with clarity and lyrical beauty.
As a young girl, Kristin is deeply devoted to her father, a kind and courageous man. But when as a student in a convent school she meets the charming and impetuous Erlend Nikulaussøn, she defies her parents in pursuit of her own desires. Her saga continues through her marriage to Erlend, their tumultuous life together raising seven sons as Erlend seeks to strengthen his political influence, and finally their estrangement as the world around them tumbles into uncertainty.
With its captivating heroine and emotional potency, Kristin Lavransdatter is the masterwork of Norway’s most beloved author—one of the twentieth century’s most prodigious and engaged literary minds—and, in Nunnally’s exquisite translation, a story that continues to enthrall.

Undset’s first published works—the novel Mrs. Marta Oulie (1907) and a short-story collection, The Happy Age (1908)—were set in contemporary times and achieved both critical and popular success. With her reputation as a writer well-established, Undset had the freedom to explore the world that had first fired her imagination, and in Gunnar's Daughter (1909) she drew upon her knowledge of Norway's history and legends, including the Icelandic Sagas, to recreate medieval life with compelling immediacy. In 1912, Undset married the painter Anders Castus Svarstad and over the next ten years faced the formidable challenge of raising three stepchildren and her own three off-spring with little financial or emotional support from her husband. Eventually, she and her children moved from Oslo to Lillehammer, and her marriage was annulled in 1924, when Undset converted to Catholicism.

Brad Leithauser is the author of several novels, four volumes of poetry, and a collection of essays. He is the Emily Dickinson Lecturer in the Humanities at Mount Holyoke College.