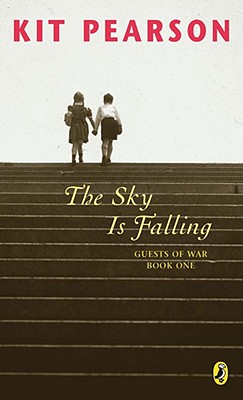 It is the summer of 1940, and all of England fears an invasion by Hitler's army. Norah lies in bed listening to the anxious voices of her parents downstairs.

Then Norah is told that she and her brother, Gavin, are being sent to Canada. The voyage across the ocean is exciting, but at the end of it Norah is miserable. The rich woman who takes them in prefers Gavin to her, the children at school taunt her, and as the news from England becomes worse, she longs for home.

As Norah begins to make friends, she discovers a surprising responsibility that helps her to accept her new country.

Kit Pearson worked as a librarian for many years before publishing her first novel, The Daring Game (1986). She went on to write the linked novels The Sky Is Falling (1989), Looking at the Moon (1991), and The Lights Go On Again (1993), published in 1999 as The Guests of War trilogy, and Awake and Dreaming (1996), which won the Governor General s Award. Pearson lives in Victoria, close to Ross Bay Cemetery, one of the settings in Awake and Dreaming ."
or
Not Currently Available for Direct Purchase
Copyright © 2020 American Booksellers Association