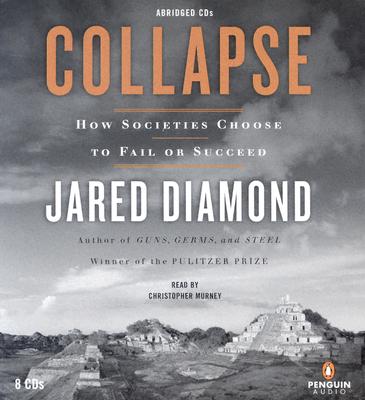 In his million-copy bestseller Guns, Germs, and Steel, Jared Diamond examined how and why Western civilizations developed the technologies and immunities that allowed them to dominate much of the world. Now in this brilliant companion volume, Diamond probes the other side of the equation: What caused some of the great civilizations of the past to collapse into ruin, and what can we learn from their fates?

As in Guns, Germs, and Steel, Diamond weaves an all-encompassing global thesis through a series of fascinating historical-cultural narratives. Moving from the Polynesian cultures on Easter Island to the flourishing American civilizations of the Anasazi and the Maya and finally to the doomed Viking colony on Greenland, Diamond traces the fundamental pattern of catastrophe. Environmental damage, climate change, rapid population growth, and unwise political choices were all factors in the demise of these societies, but other societies found solutions and persisted. Similar problems face us today and have already brought disaster to Rwanda and Haiti, even as China and Australia are trying to cope in innovative ways. Despite our own society's apparently inexhaustible wealth and unrivaled political power, ominous warning signs have begun to emerge even in ecologically robust areas like Montana.

"Mr. Diamond...is a lucid writer with an ability to make arcane scientific concepts readiily accesible to the lay reader, and his case studies of failed cultures are never less than compelling."—The New York Times

"...Collapse is a magisterial effort packed with insight and written with clarity and enthusiasm."—Businessweek

"Guns, Germs, and Steel and Collapse represent one of the most significant projects embarked upon by any intellectual of our generation. They are magnificent books: extraordinary in erudition and originality, compelling in their ability to relate the digitized pandemonium of the present to the hushed agrarian sunrises of the far past. I read both thinking what literature might be like if every author knew so much, wrote so clearly and formed arguments with such care."—Gregg Easterbrook, The New York Times Book Review

Jared Diamond is a professor of geography at the University of California, Los Angeles. He began his scientific career in physiology and expanded into evolutionary biology and biogeography. Among his many awards are the National Medal of Science, the Tyler Prize for Environmental Achievement, Japan's Cosmos Prize, a MacArthur Foundation Fellowship, and the Lewis Thomas Prize honoring the Scientist as Poet, presented by The Rockefeller University. His previous books include "Why Is Sex Fun?," "The Third Chimpanzee," "Collapse," "The World Until Yesterday, " and "Guns, Germs, and Steel," winner of the Pulitzer Prize.
Loading...
or
Not Currently Available for Direct Purchase