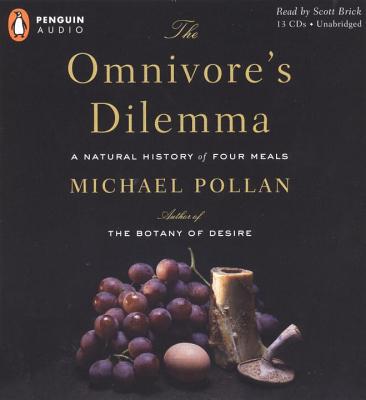 A Natural History of Four Meals

"What should we have for dinner?" To one degree or another this simple question assails any creature faced with a wide choice of things to eat. Anthropologists call it the omnivore's dilemma. Choosing from among the countless potential foods nature offers, humans have had to learn what is safe, and what isn't-which mushrooms should be avoided, for example, and which berries we can enjoy. Today, as America confronts what can only be described as a national eating disorder, the omnivore's dilemma has returned with an atavistic vengeance. The cornucopia of the modern American supermarket and fast-food outlet has thrown us back on a bewildering landscape where we once again have to worry about which of those tasty-looking morsels might kill us. At the same time we're realizing that our food choices also have profound implications for the health of our environment. The Omnivore's Dilemma is bestselling author Michael Pollan's brilliant and eye-opening exploration of these little-known but vitally important dimensions of eating in America.

Pollan has divided The Omnivore's Dilemma into three parts, one for each of the food chains that sustain us: industrialized food, alternative or "organic" food, and food people obtain by dint of their own hunting, gathering, or gardening. Pollan follows each food chain literally from the ground up to the table, emphasizing our dynamic coevolutionary relationship with the species we depend on. He concludes each section by sitting down to a meal—at McDonald's, at home with his family sharing a dinner from Whole Foods, and in a revolutionary "beyond organic" farm in Virginia. For each meal he traces the provenance of everything consumed, revealing the hidden components we unwittingly ingest and explaining how our taste for particular foods reflects our environmental and biological inheritance.

We are indeed what we eat-and what we eat remakes the world. A society of voracious and increasingly confused omnivores, we are just beginning to recognize the profound consequences of the simplest everyday food choices, both for ourselves and for the natural world. The Omnivore's Dilemma is a long-overdue book and one that will become known for bringing a completely fresh perspective to a question as ordinary and yet momentous as What shall we have for dinner?

A few facts and figures from The Omnivore's Dilemma: A Natural History of Four Meals

MICHAEL POLLAN is the author of six previous books, including Food Rules, In Defense of Food, The Omnivore’s Dilemma, and The Botany of Desire, all New York Times bestsellers. A longtime contributor to The New York Times, he is also the Knight Professor of Journalism at Berkeley. In 2010, Time magazine named him one of the one hundred most influential people in the world.

www.michaelpollan.com
Loading...
or
Not Currently Available for Direct Purchase