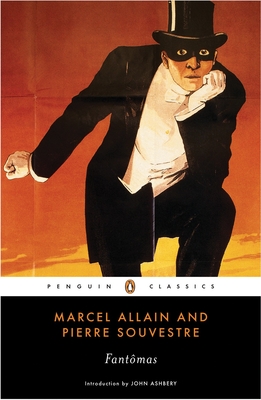 “One episode simply melts away as the next takes over” (The New York Times) in this deliciously sinister turn-of-the-century tale of a French evil genius run rampant. Three appalling crimes leave all of Paris aghast: the Marquise de Langruen is hacked to death, the Princess Sonia is robbed, and Lord Beltham is found dead, stuffed into a trunk. Inspector Juve knows that all the clues point to one suspect: the master of disguise, Fantômas. Juve cleverly pursues him in speeding trains, down dark alleys, through glittering Parisian salons, obsessed with bringing the demon mastermind to justice. As thrilling to read now as it was when first published in 1915, Fantômas “is not a puzzle but an intoxicant” (The Village Voice).

[Fantomas is] like going on a roller coaster: you know what to expect but you scream, with fear and pleasure, anyway. . . . They don’t write’em like that anymore. (Michael Dirda)

After Fantômas was published in 1911 to wild popularity and success, Marcel Allain—the secretary and writing partner of the already well-known journalist and novelist Pierre Souvestre—went on to publish 20 equels to the original. After Souvestre's death in 1914, Allain wrote another eleven books in the Fantômas series and launched several other pulp fiction series on his own. Allain passed away in 1969, having written more than 400 novels throughout his career.

After Fantômas was published in 1911 to wild popularity and success, Pierre Souvestre, an already well-known journalist and novelist, and Marcel Allain, his secretary and writing partner, went on to publish twenty sequels to the original. After Souvestre's death in 1914, Allain wrote another eleven books in the Fantômas series and launched several other pulp fiction series on his own.

John Ashbery has published more than 20 books of poetry and has won almost every notable award for poetry in the United States. His collection Self-Portrait in a Convex Mirror received the Pulitzer Prize for Poetry, the National Book Critics Circle Award, and the National Book Award. The Charles P. Stevenson, Jr., Professor of Languages and Literature at Bard College until 2008, Ashbery was poet laureate of New York State from 2001 to 2003 and chancellor of the Academy of American Poets from 1988 to 1999.
Loading...
or
Not Currently Available for Direct Purchase