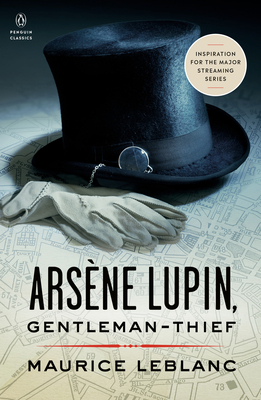 Inspiration for the Major Streaming Series

A curated collection of the very best adventures of Arsène Lupin, France’s most famous gentleman thief

The poor and the innocent have nothing to fear from Lupin; often they profit from his spontaneous generosity. The rich and powerful, and the detective who tries to spoil his fun, however, must beware. They are the target of Lupin’s mischief. With plans that frequently evolve into elaborate plots, Lupin is a gentleman burglar turned detective, and the most entertaining criminal genius in literature.

These stories – the best of the Lupin series, including “The Queen’s Necklace” and “Arsène Lupin in Prison”–  are outrageous and witty, for the full enjoyment of those who love masters of disguise, extraordinary heists, and the panache found with Sherlock Holmes, James Bond, Ocean’s Eleven and Lupin.

Maurice Leblanc was born in Rouen, France in 1864. He began his writing career with realistic works in the manner of his hereoes Flaubert and Maupassant, producing such novels as La Femme in 1887. He is remembered today, however, for his dozens of inventive and amusing stories an novels about the masterful thief Arsène Lupin, a burgular and confidence man who eventually also becomes a detective. Leblanc created Lupin in 1905 for a series requested by a magazine editor. There were five collections of Lupin stories: Arsène Lupin, Gentleman-Burglar (1906), Arsène Lupin versus Sherlock Holmes (1908), The Confessions of Arsène Lupin (1912), The Eight Strokes of the Clock (1922), and Arsène Lupin Intervenes (1928).

Michael Sims has edited two other collections for Penguin Classics: The Annotated Archy and Mehitable and Arsene Lupin, Gentleman-Thief. His research for the latter inspired The Penguin Book of Gaslight Crime. His writing has appeared in New Statesman, Gourmet, Orion, the Washington Post, and many other periodicals in the United States and abroad.
Loading...
or support indie stores by buying on