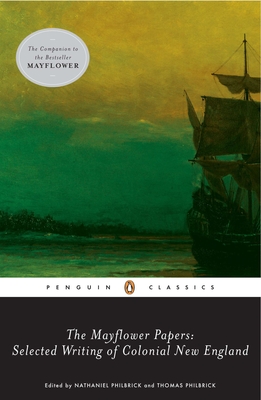 The most important personal accounts of the Plymouth Colony, the key sources of Nathaniel Philbrick's New York Times bestseller Mayflower

National Book Award winner Nathaniel Philbrick and his father, Thomas Philbrick, present the most significant and readable original works that were used in the writing of Mayflower, offering a definitive look at a crucial era of America's history. The selections include William Bradford's "Of Plymouth Plantation" (1651), the most comprehensive of all contemporary accounts of settlement in seventeenth-century America; Benjamin Church's "Entertaining Passages Relating to Philip's War 1716," an eye-opening account from Church's field notes from battle; and much more. Providing explanatory notes for every piece, the editors have vividly re-created the world of seventeenth-century New England for anyone interested in the early history of our nation.

Nathaniel Philbrick is a leading authority on the history of Nantucket Island. His In the Heart of the Sea won the National Book Award. His latest book is Sea of Glory, about the epic U.S. Exploring Expedition of 1838–1842. His other books include Away off Shore: Nantucket Island and Its People, 1602-1890 (which Russell Baker called "indispensable") and Abram's Eyes: The Native American Legend of Nantucket Island ("a classic of historical truthtelling," according to Stuart Frank, director of the Kendall Whaling Museum). He has written an introduction to a new edition of Joseph Hart's Miriam Coffin, or The Whale Fisherman, a Nantucket novel (first published in 1834) that Melville relied upon for information about the island when writing Moby Dick.

Philbrick, a champion sailboat racer, has also written extensively about sailing, including The Passionate Sailor (1987) and the forthcoming Second Wind: A Sunfish Sailor's Odyssey. He was editor in chief of the classic Yaahting: A Parody (1984).

In his role as director of the Egan Institute of Maritime Studies, Philbrick, who is also a research fellow at the Nantucket Historical Association, gives frequent talks about Nantucket and sailing. He has appeared on "NBC Today Weekend," A&E's "Biography" series, and National Public Radio and has served as a consultant for the movie Moby Dick, shown on the USA Network. He received a bachelor of Arts from Brown University and a Master of Arts in American Literature from Duke. He lives on Natucket with his wife and two children.

Thomas Philbrick is professor emeritus of English at the University of Pittsburgh.