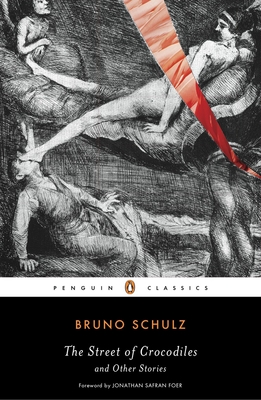 The Street of Crocodiles and Other Stories

Bruno Schulz's untimely death at the hands of a Nazi stands as one of the great losses to modern literature. During his lifetime, his work found little critical regard, but word of his remarkable talents gradually won him an international readership. This volume brings together his complete fiction, including three short stories and his final surviving work, Sanatorium Under the Sign of the Hourglass. Illustrated with Schulz's original drawings, this edition beautifully showcases the distinctive surrealist vision of one of the twentieth century's most gifted and influential writers.

Praise For The Street of Crocodiles and Other Stories…

“[Schulz’s] very beautiful, sensitive, meaningful stories raised the Polish language to a completely different level. I love him but I also hate him because there’s no way to compete with him. He’s the genius of the Polish language.” —Olga Tokarczuk, The Guardian

“Every time I open his books, I’m amazed anew to discover how this writer, a single human being who rarely left his home town, created for us an entire world, an alternate dimension of reality. . . . His [stories] create a fantastic universe, a private mythology of one family, and are written in a language that brims with life, a language that is itself the main character of the stories and is the only dimension in which they could possibly exist. . . . On every page, life [is] raging, exploding with vitality, suddenly worthy of its name.” —David Grossman, The New Yorker

“Bruno Schulz’s slim output of stories were all he needed to publish in his lifetime to earn his place alongside other 20th-century giants like Franz Kafka and Jorge Luis Borges.” —Sjón, Vulture

“Bruno Schulz was one of the great writers, one of the great transmogrifiers of the world into words. . . . [His] verbal art strikes us—stuns us, even—with its overload of beauty.” —John Updike

“One of the most original imaginations in modern Europe.” —Cynthia Ozick

“Schulz cannot be easily classified. He can be called a surrealist, a symbolist, an expressionist, a modernist. . . . He wrote sometimes like Kafka, sometimes like Proust, and at times succeeded in reaching depths that neither of them reached. . . . If Schulz had been allowed to live out his life, he might have given us untold treasures, but what he did in his short life was enough to make him one of the most remarkable writers who ever lived.” —Isaac Bashevis Singer

“Rich in fantasy, sensuous in their apprehension of the living world, elegant in style, witty, underpinned by a mystical but coherent idealistic aesthetic, The Street of Crocodiles and Sanatorium Under the Sign of the Hourglass were unique and startling productions, seeming to come out of nowhere. . . . Schulz was incomparably gifted as an explorer of his own inner life, which is at the same time the recollected inner life of his childhood and his own creative workings. From the first comes the charm and freshness of his stories, from the second their intellectual power.” —J. M. Coetzee, The New York Review of Books

Bruno Schulz, a Polish Jew killed by the Nazis in 1942, is considered by many to have been the leading Polish writer between the two world wars.

Celina Wieniewska (translator) was awarded the 1963 Roy Publishers Polish-into-English prize for her translation of The Street of Crocodiles.

Jonathan Safran Foer (foreword) is the bestselling author of the novels Everything is Illuminated, Extremely Loud and Incredibly Close, and Here I Am. He lives in Brooklyn, New York.

David A. Goldfarb (introducer) taught for eight years in the Slavic department at Barnard College, Columbia University. He has written on a range of writers and subjects, including Bruno Schulz, Witold Gombrowicz, Nikolai Gogol, Mikhail Lermontov, Ivan Turgenev, Leo Tolstoy, and East European cinema.
Loading...
or support indie stores by buying on