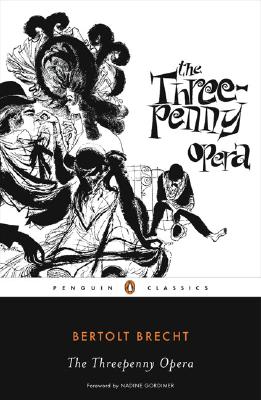 Brutal, scandalous, perverted, yet humorous, hummable, and with a happy ending- Bertolt Brecht's revolutionary masterpiece The Threepenny Opera is a landmark of modern drama that has become embedded in the Western cultural imagination. Through the love story of Polly Peachum and "Mack the Knife" Macheath, the play satirizes the bourgeois of the Weimar Republic, revealing a society at the height of decadence and on the verge of chaos. Complemented with music by Kurt Weill, it was one of the earliest and most successful attempts to introduce jazz into the theater, and the song "Mack the Knife" became one of the most popular and widely recorded songs of the twentieth century.
For more than seventy years, Penguin has been the leading publisher of classic literature in the English-speaking world. With more than 1,700 titles, Penguin Classics represents a global bookshelf of the best works throughout history and across genres and disciplines. Readers trust the series to provide authoritative texts enhanced by introductions and notes by distinguished scholars and contemporary authors, as well as up-to-date translations by award-winning translators.

Praise For The Threepenny Opera…

"The Threepenny Opera and Mother Courage are the great plays of our time."
-Lillian Hellman

Nadine Gordimer is the author of eleven previous novels, as well as collections of stories and essays. She has received many awards, including the Booker Prize (for The Conservationist in 1974) and the Nobel Prize in Literature in 1991. She lives in Johannesburg, South Africa.
Loading...
or
Not Currently Available for Direct Purchase