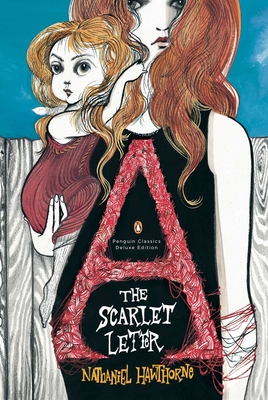 An iconic novel dressed in a fierce design by acclaimed fashion illustrator Ruben Toledo. Other titles in the couture-inspired collection include Jane Eyre, The Picture of Dorian Gray, Dracula, Wuthering Heights and Pride and Prejudice.Ruben Toledo’s breathtaking drawings have appeared in such high-fashion magazines as Vogue, Harper’s Bazaar, and Visionaire. Now he’s turning his talented hand to illustrating the gorgeous deluxe editions of three of the most beloved novels in literature. Here Elizabeth Bennet’s rejection of Mr. Darcy, Hester Prynne’s fateful letter “A”, and Catherine Earnshaw’s wanderings on the Yorkshire moors are transformed into witty and surreal landscapes to appeal to the novels’ aficionados and the most discerning designer’s eyes.

Nathaniel Hawthorne was born on July 4, 1804, in Salem, Massachusetts, the son and grandson of proud New England seafarers. He lived in genteel poverty with his widowed mother and two young sisters in a house filled with Puritan ideals and family pride in a prosperous past. His boyhood was, in most respects, pleasant and normal. In 1825 he was graduated from Bowdoin College, Brunswick, Maine, and he returned to Salem determined to become a writer of short stories. For the next twelve years he was plagued with unhappiness and self-doubts as he struggled to master his craft. He finally secured some small measure of success with the publication of his Twice-Told Tales (1837). His marriage to Sophia Peabody in 1842 was a happy one. The Scarlet Letter (1850), which brought him immediate recognition, was followed by The House of the Seven Gables (1851). After serving four years as the American Consul in Liverpool, England, he traveled in Italy; he returned home to Massachusetts in 1860. Depressed, weary of writing, and failing in health, he died on May 19, 1864, at Plymouth, New Hampshire.