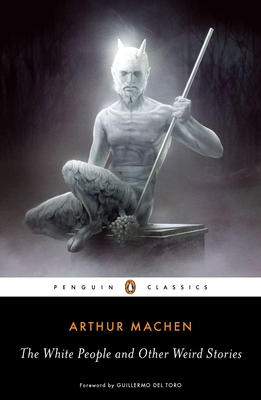 The White People and Other Weird Stories

Classic tales of the fantastic, creepy and weird, with a foreword from the award-winning director of The Shape of Water Guillermo Del Toro

Machen's weird tales of the creepy and fantastic finally come to Penguin Classics. With an introduction from S.T. Joshi, editor of American Supernatural Tales, The White People and Other Weird Stories is the perfect introduction to the father of weird fiction. The title story "The White People" is an exercise in the bizarre leaving the reader disoriented and on edge. From the first page, Machen turns even fundamental truths upside-down, as his character Ambrose explains, "there have been those who have sounded the very depths of sin, who all their lives have never done an 'ill deed'" setting the stage for a tale entirely without logic.

Praise For The White People and Other Weird Stories…

"The pleasure of rediscovering these stories or experiencing them for the first time is sure to be amplified by the insightful foreword by filmmaker Guillermo del Toro (Pan's Labyrinth) and the excellent introduction by S. T. Joshi." — Craig Smith

"As a selection of 'weird' short stories, The White People is a fine example of the precursor to what has become a popular subgenre of fantasy fiction, as well as a window on to the spiritual concerns of the Welsh author Arthur Machen (1863-1947): the veil separating the phenomenal world and the supernal realm is thin. While we may have forgotten the rituals, spells, charms and wards once used to commune with the spirits, the spirits have not forgotten us."

Arthur Machen (Arthur Llewelyn Jones), a Welsh author of supernatural, fantasy, and horror fiction, was born on March 3, 1863. He grew up in Caerleon, Monmouthshire, and attended boarding school at Hereford Cathedral School. He moved to London in 1881 and worked as a journalist, children's tutor, and publisher's clerk, finding time to write at night. By 1894, Machen had his first major success. The Great God Pan was published by John Lane, and despite widespread criticism for its sexual and horrific content, it sold well and went into a second edition. In the 1920s Machen's work became immensely popular in the United States, but Machen experienced increasing poverty; he was saved in 1931 by receiving a Civil List pension from the British government. Arthur Machen died on March 30, 1947.

S. T. Joshi (b. 1958) is the author of such critical studies as The Modern Weird Tale (2001). His exhaustive biography, H. P. Lovecraft: A Life (1996), won the British Fantasy Award and the Bram Stoker Award from the Horror Writers Association.

Guillermo del Toro (b. 1964) is a Mexican director, producer, screenwriter, novelist and designer. He is most recognized for his Academy Award-winning films, Pan's Labyrinth and the Hellboy film franchise. He is an avid fan of weird fiction and fantasy writing and the genres heavily inspire his movies.
Loading...
or support indie stores by buying on