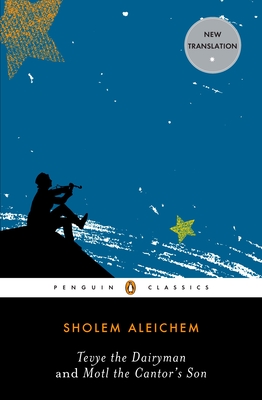 Tevye the Dairyman and Motl the Cantor's Son

For the 150th anniversary of the birth of the "Jewish Mark Twain,"a new translation of his most famous works

Tevye the Dairyman and Motl the Cantor's Son are the most celebrated characters in all of Jewish fiction. Tevye is the lovable, Bible-quoting father of seven daughters, a modern Job whose wisdom, humor, and resilience inspired the lead character in Fiddler on the Roof. And Motl is the spirited and mischievous nine-year-old boy who accompanies his family on a journey from their Russian shtetl to New York, and whose comical, poignant, and clear-eyed observations capture with remarkable insight the struggles and hopes and triumphs of Jewish immigrants to America at the turn of the twentieth century.

Sholem Aleichem is the pen name of Sholem Rabinovitch (1859-1916), the most beloved writer in Yiddish literature. Born in Russia, he fled the pogroms and immigrated to New York in 1905.

Aliza Shevrin is the foremost translator of Sholem Aleichem, having translated eight other volumes of his fiction. She lives in Ann Arbor.
Loading...
or support indie stores by buying on