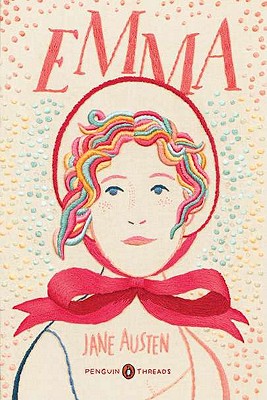 A Penguin Threads edition of Austen's most beloved novel

With its imperfect but charming heroine and its witty and subtle exploration of relationships, Emma is often seen as Jane Austen's most flawless work, this Penguin Threads edition includes cover art by Jillian Tamaki and deluxe french flaps. Commissioned by award-winning Penguin art director Paul Buckley, the Penguin Threads series debuts with cover art by Jillian Tamaki for three gift-worthy Penguin Classics. Sketched out in a traditional illustrative manner, then hand stitched using needle and thread, the final covers are sculpt embossed for a tactile, textured, and beautiful book design that will appeal to the Etsy(tm)-loving world of handmade crafts.

"Jane Austen is my favorite author! ... Shut up in measureless content, I greet her by the name of most kind hostess, while criticism slumbers." —EM Forster

Jane Austen (1775-1817) was the seventh child of a parish rector. She died unmarried, leaving behind an immortal body of work.

Jillian Tamaki is an illustrator and comic artist and teaches at the School of Visual Arts. She is the author of Gilded Lilies and Indoor Voice and the graphic novel Skim, a New York Times Best Book of the Year. Her drawings have appeared in The New York Times, O, The Oprah Magazine, The New Yorker, and Esquire.
Loading...
or
Not Currently Available for Direct Purchase