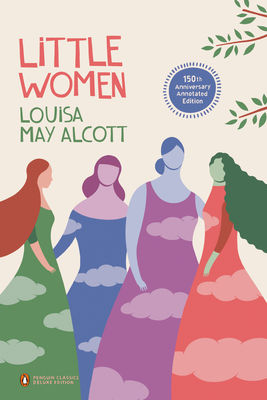 A beautiful new Deluxe Edition of Alcott's beloved novel, with a foreword by National Book Award-winning author and musician Patti Smith. Nominated as one of America’s most-loved novels by PBS’s The Great American Read.

Little Women is recognized as one of the best-loved classic children's stories, transcending the boundaries of time and age, making it as popular with adults as it is with young readers. The beloved story of the March girls is a classic American feminist novel, reflecting the tension between cultural obligation and artistic and personal freedom. But which of the four March sisters to love best? For every reader must have their favorite. Independent, tomboyish Jo; delicate, loving Beth; pretty, kind Meg; or precocious and artistic Amy, the baby of the family? The charming story of these four "little women" and their wise and patient mother Marmee enduring hardships and enjoying adventures in Civil War New England was an instant success when first published in 1868 and has been adored for generations.

"Perhaps no other book provided a greater guide, as I set out on my youthful path, than Louisa May Alcott’s most beloved novel, Little Women."
—From the Foreword by Patti Smith

"I have always gravitated towards the cozy book, and nothing is cozier than Little Women. It was one of the books that fostered my love of America, very early on, and showed me what makes a great character, particularly in headstrong Jo."
—Jane Green

Louisa May Alcott was born in Germantown, Pennsylvania, in 1832, the second of four daughters of Abigail May Alcott and Bronson Alcott, the prominent Transcendentalist thinker and social reformer. Raised in Concord, Massachusetts, and educated by her father, Alcott early on came under the influence of the great men of his circle: Emerson, Hawthorne, the preacher Theodore Parker, and Thoreau. From her youth, Louisa worked at various tasks to help support her family: sewing, teaching, domestic service, and writing. In 1862, she volunteered to serve as an army nurse in a Union hospital during the Civil War— an experience that provided her material for her first successful book, Hospital Sketches (1863). Between 1863 and 1869, she published several anonymous and pseudonymous Gothic romances and lurid thrillers. But fame came with the publication of her Little Women (1868– 69), a novel based on the childhood adventures of the four Alcott sisters, which received immense popular acclaim and brought her financial security as well as the conviction to continue her career as a writer. In the wake of Little Women’s popularity, she brought out An Old- Fashioned Girl (1870), Little Men(1871), Eight Cousins (1875), Rose in Bloom (1876), Jo’s Boys (1886), and other books for children, as well as two adult novels, Moods (1864) and Work (1873). An active participant in the women’s suffrage and temperance movements during the last decade of her life, Alcott died in Boston in 1888, on the day her father was buried.

Patti Smith is a writer, performer, and visual artist. She gained recognition in the 1970s for her revolutionary merging of poetry and rock. She has released twelve albums, including Horses, which has been hailed as one of the top one hundred albums of all time by Rolling Stone. Smith had her first exhibit of drawings at the Gotham Book Mart in 1973 and has been represented by the Robert Miller Gallery since 1978. Her books include M Train, Just Kids, winner of the National Book Award in 2010, Wītt, Babel, Woolgathering, The Coral Sea, and Auguries of Innocence. In 2005, the French Ministry of Culture awarded Smith the title of Commandeur des Arts et des Lettres, the highest honor given to an artist by the French Republic. She was inducted into the Rock and Roll Hall of Fame in 2007. Smith married the musician Fred Sonic Smith in Detroit in 1980. They had a son, Jackson, and a daughter, Jesse. Smith resides in New York City.

Anne Boyd Rioux is Professor of English at the University of New Orleans and the author/editor of several books, including Meg, Jo, Beth, Amy: The Story of Little Women and Why It Still Matters (Norton, 2018). The recipient of two National Endowment for the Humanities fellowships, one for public scholarship, she writes reviews and essays for general and academic audiences, specializing in women writers.
Loading...
or support indie stores by buying on