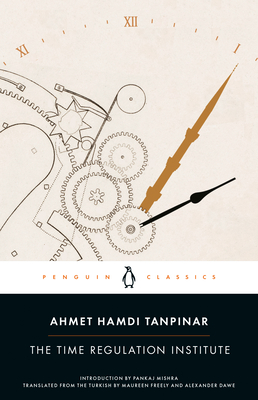 A literary discovery: an uproarious tragicomedy of modernization, in its first-ever English translation

Perhaps the greatest Turkish novel of the twentieth century, being discovered around the world only now, more than fifty years after its first publication, The Time Regulation Institute is an antic, freewheeling send-up of the modern bureaucratic state.

At its center is Hayri Irdal, an infectiously charming antihero who becomes entangled with an eccentric cast of characters—a television mystic, a pharmacist who dabbles in alchemy, a dignitary from the lost Ottoman Empire, a “clock whisperer”—at the Time Regulation Institute, a vast organization that employs a hilariously intricate system of fines for the purpose of changing all the clocks in Turkey to Western time. Recounted in sessions with his psychoanalyst, the story of Hayri Irdal’s absurdist misadventures plays out as a brilliant allegory of the collision of tradition and modernity, of East and West, infused with a poignant blend of hope for the promise of the future and nostalgia for a simpler time.

Praise For The Time Regulation Institute…

“Ahmet Hamdi Tanpinar is undoubtedly the most remarkable author in modern Turkish literature. With The Time Regulation Institute, this great writer has created an allegorical masterpiece, which makes Turkey’s attempts to westernize and its delayed modernity understandable in all its human ramifications.” —Orhan Pamuk, winner of the Nobel Prize in Literature

“This excellent book . . . is before all else a first-rate comic novel. . . . Not only entertaining and substantial but also, for lack of a better word, timely. For beyond the historical relevance, beyond the comic esprit, Tanpinar’s elaborate bittersweet sendup of Turkish culture over a half-century ago speaks perfectly clearly to our own, offering long-distance commiseration to anyone whose life is twisted around schedules and deadlines—pretty much everyone, in other words—provided you can find the time to read it.” —The New York Times Book Review

“A truly pathbreaking novel, at once nostalgic and modernist, contemporary and out of its time.” —Bookforum

“An absolutely brilliant, sui generis satirical novel . . . A rich, Ottoman meander of picaresque tales and shaggy dog stories . . . It’s kind of Dickensian but wryer, more absurdist and less sentimental, I detect notes of Hašek. . . . The attitude that underlies the novel is rueful, head-smacking incredulity, Catch-22-style. . . . I see this satire as a work of resistance: it suggests that no dictator, even a progressive one, can change the character of a people just by moving the minute hand on a watch face.” —Liesl Schillinger, Lit Hub

“Spellbinding . . . A gem . . . A very funny novel, both in design and line by line . . . As compelling as a lucid dream . . . Its publication feels like a victory. . . . Both novel and author are undeniable stars and deserve, one feels, to have finally reached the world stage, showcased in a spotlight as bright as Penguin Classics.” —The National

“One of the best comic novels of the twentieth century in any language.” —Guernica

“Prepare to enjoy a voice you did not know existed. . . . [A] beguiling twentieth-century writer, [Tanpinar] wrote in the expansive, unhurried tempo of an earlier era—a little like Russia’s Ivan Goncharov, author of Oblomov, but with more energy, art, and invention. . . . Tanpinar’s multi-timbred prose [and his] luxuriant language and sensibility will envelop you. . . . Like Joseph Heller’s Catch-22 or Jaroslav Hašek’s unfinished dark comedy, The Good Soldier Švejk, The Time Regulation Institute defends the individual spirit—faulty and inconsistent as it may be—against the state that seeks to submerge it in burdensome, soulless duty. . . . Splendid.” —The Barnes & Noble Review

“During Tanpinar’s lifetime he was misunderstood and underestimated . . . ; today, decades after his death, he is adulated in Turkey almost to the point of worship. . . . The questions of identity and how to escape it were examined by Tanpinar . . . through incisive analysis and subtle satire—and perhaps nowhere more powerfully than in his best-known book, The Time Regulation Institute, which is now available in a new English translation and with a superb introduction by Pankaj Mishra. . . . The translation deserves commendation. . . . The writing feels timeless and universal. . . . The questions [Tanpinar] raised, perhaps now more than ever, matter not only in Turkey but around the world.” —Elif Shafak, The Times Literary Supplement

“Hilarious . . . Richly imagined . . . A brilliant author . . . Like Proust, and Pamuk, Tanpinar opens doors to other books and ideas. . . . Tanpinar’s prose . . . glows and echoes, and one never quite forgets the strange taste of his sentences after reading them. . . . [The Time Regulation Institute is] perhaps the best Turkish novel of the 20th century alongside Orhan Pamuk’s The Black Book.” —PEN Atlas

“Like all great satire, this book will make readers laugh and cringe in equal measure. . . . [It] seamlessly combines personal wit with political satire.” —Kirkus Reviews

“Brilliantly comic . . . As you read The Time Regulation Institute, you may have the impression that you are reading a nineteenth-century novel— . . . with dozens of characters, surprising sub-plots and revelations—in short, all the good stuff of those classic French, German, English and Russian classics. So now we can add a Turkish novel to the list. . . . Tanpinar’s masterpiece [is] finally available in a glorious English translation.” —Counterpunch

“Maureen Freely and Alexander Dawe’s masterful and finely nuanced translation lures the reader into the novel’s many complexities . . . in an English that is both clear and musical.” —Judges’ citation, Modern Language Association’s Lois Roth Award

“How is it that it has taken half a century for this extraordinary novel to reach a public outside the Turkish language? . . . Dickens’s Jarndyce family and their Chancery lawyers, Melville’s Bartleby and his Dead Letter Office, Kafka’s K and his hallucinatory trial [are] forerunners incarnated in Tanpinar’s naïf hero . . . who is held captive in that same world of absurd rules and regulations. . . . Penguin Classics has done English-speaking readers a great service by allowing us to discover in The Time Regulation Institute one of the great satirical masterpieces of modern times [by] one of the most talented and ingenious writers of the twentieth century.” —Alberto Manguel, Geist

Ahmet Hamdi Tanpinar (1901-1962) is considered one of the most significant Turkish novelists of the twentieth century. Also a poet, short-story writer, essayist, literary historian, and professor, he created a unique cultural universe in his work, combining a European literary voice with the Ottoman sensibilities of the Near East.

Maureen Freely (translator) is the principal translator of Orhan Pamuk, the Nobel Prize–winning Turkish novelist. She lives in England.

Alexander Dawe (translator) is an American translator of French and Turkish. He lives in Istanbul.

Pankaj Mishra (introducer) is an award-winning novelist and essayist whose writing appears frequently in The New Yorker, The New York Review of Books, The Guardian, and the London Review of Books. He was born in North India and now lives in London.
Loading...
or
Not Currently Available for Direct Purchase