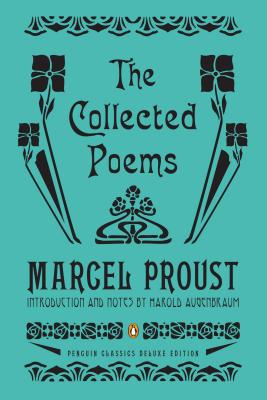 For the centennial of Swann's Way: the most complete volume of Proust's poetry ever assembled, in a gorgeous deluxe edition

As a young man, Proust wrote both poetry and prose. Even after he embarked on his masterful In Search of Lost Time at the age of thirty-eight, he never stopped writing poetry. His verse is often playful, filled with affection and satire, and is peppered with witty barbs at friends and people in his social circle of aristocrats, writers, musicians, and courtesans.

Few of the poems collected here under the editorship of Harold Augenbraum, founder of the Proust Society of America, have ever been published in book form or translated into English until now. In this dual-language edition of new translations, Augenbraum has brought together nineteen renowned poets and poetry translators to bring Proust's exuberant verse back to life.

"No doubt anyone with an interest in Marcel Proust will be grateful for Penguin's new dual language edition of The Collected Poems, incisively edited by Harold Augenbraum and drawing on the work of 20 translators. But devotees of David Foster Wallace, Jorge Luis Borges, Julio Cortazar, Jean Rhys -- even Kenneth Burke -- will also be enthralled: if an infinite book has no beginning or end, then surely this is one. Augenbraum's introduction and hugely entertaining notes help make the volume at least three books, really. Palimpsest or holographic to the poems, Augenbraum's given us a biography of Proust as well as an engrossing cultural history, a cubist portrait of the writer's milieu and his most intimate friendships. [ ...] All along the book has been a network of boulevards and gardens, cross streets and alleys, and we are flaneurs, flaneuses, wandering once more through Proust's youth, roaming through the middle of the text again, and we find there much worth discovering, much worth remembering."
—John Hennessey, Huffington Post

Marcel Proust (1871–1922) spent his twenties as a conspicuous society figure, but after 1907 he rarely emerged from a cork-lined room in his apartment where he devoted himself to the composition of In Search of Lost Time.
Harold Augenbraum is the executive director of the National Book Foundation and founder of the Proust Society of America, and he has previously translated José Rizal and Alvar Núñez Cabeza de Vaca for Penguin Classics. He lives in New York City.
Loading...
or support indie stores by buying on