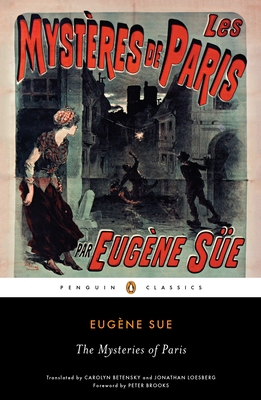 The Mysteries of Paris (Paperback)

Sensational, engrossing, and heartbreaking, The Mysteries of Paris is doubtless one of the most entertaining and influential works to emerge from the nineteenth century. It was one of France’s first serial novels, and for sixteen months, Parisians rushed in droves to the newsstands each week for the latest installment. Eugène Sue’s intricate melodrama unfolds around a Paris where, despite the gulf between them, the fortunes of the rich and poor are inextricably tangled. The suspenseful story of Rodolphe, a magnetic hero of noble heart and shadowy origins, was spun out over 150 issues—garnering wild popularity, influencing political change, and inspiring a raft of successors, including Les Misérables and The Count of Monte Cristo. At long last, this lively translation makes the riveting drama of Sue’s classic available to a new century of readers.

Eugène Sue (1804–1857) was a French novelist. In addition to The Mysteries of Paris, his works include The Wandering Jew, an anticlerical melodrama, and The Mysteries of the People, a fictionalized history of the working classes throughout French history. In 1850, Sue won election to the National Assembly as a Socialist delegate.

Carolyn Betensky is an associate professor of English at the University of Rhode Island.

Jonathan Loesberg is a professor of literature at American University.

Peter Brooks is a professor emeritus at Yale and currently teaches at Princeton. His essays and reviews have appeared in in the New York Times, the New York Review of Books, and elsewhere.

Praise For The Mysteries of Paris…

"Sue’s The Mysteries of Paris not only influenced Les Miserables, it also gave rise to a subgenre of Gothicky novels about the dark underside of big cities, including London, New Orleans and Philadelphia (George Lippard’s notorious The Quaker City). Aristocrats with secrets, a prostitute with a heart of gold, criminals nicknamed the Schoolmaster and the She-Wolf, an evil lawyer, thwarted love, blackmail and conspiracy — this is a sprawling novel that packs in everything and then adds more."
-Michael Dirda, The Washington Post

“One might not think that a gargantuan Parisian novel, published in 150 newspaper episodes in the middle of the 19th century, would fill anyone's 21st-century bill as an absolute ripsnorter - but Eugène Sue's The Mysteries of Paris does exactly that… Few books are more earnest, and few read so fresh, so gloriously now. Part of that freshness comes down to the laurel-winning translation by Carolyn Betensky and Jonathan Loesberg… Even a bibliographic-centric Schoolmaster will not find for you a better novel in this annum, or most others.”
-The Philadelphia Inquirer

“[Sue] remains a literary hero to both dissidents and boulevardiers. Despite his relative obscurity outside France, this new translation of what is undoubtedly his crowning literary achievement should go some way to introducing the great serialist to the English-speaking world.”
-The Times Literary Supplement